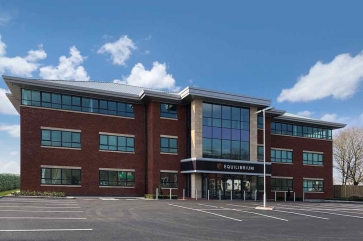 Expanding Chartered Financial Planning firm Equilibrium has shown confidence in the future by taking a 15 year lease on a new HQ office building for its 89 staff.

The Cheshire-based firm has moved from two older buildings to 23,000 square feet of new premises in Ascot House, Handforth.

The company manages £1bn worth of assets and has a turnover of over £10m. Recently the firm announced it would invest client money only in fund groups that meet ESG criteria.

Equilibrium was founded in 1995 by Colin Lawson and specialises in all areas of wealth management, including Financial Planning, investment management, pensions, tax planning and estate planning.

She said: “We’ve been in our old office for nearly 15 years, and we really made it our home – the whole team has some great memories there, and we’ve celebrated numerous brilliant achievements there over the years.

“However, as we’re accelerating into a new era, we’re excited to make new memories in a brand-new, purpose-built space. Our team was split between two buildings at our previous HQ, so it will be fantastic to have everyone under one roof in the new office once the team returns full-time. We’ll also be benefitting from upgraded client meeting rooms and we’ll have lots of space to grow.”

The firm has grown steadily in recent years, increasing staff numbers to nearly 90 and substantially increasing turnover. The company has pledged to share its success by donating £4m to charitable causes and organisations.

The company was recently named in the Top 10 of the Sunday Times Best Small Companies To Work For list for the fourth consecutive year. It also received a special award for workplace wellbeing and ranked second and fifth in the regional North West list in 2019 and 2020 respectively.

More in this category: « Curtis Banks pushes up SIPP fees WH Ireland snaps up Chartered Planner for £7.8m »
back to top