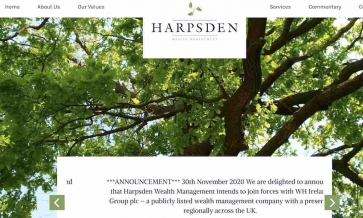 The move is a boost to WH Ireland’s wealth management aspirations and will be funded by an equity placing.

The takeover is worth £7.8m with an initial cash payment of £5.3m followed by two further contingent payments of £1.25m each over 24 months

To fund the deal WH Ireland is carrying out an equity fund-raising to raise approximately £5.3m at 40 pence per share.

Phillip Wale, WH Ireland CEO, said: "The acquisition of Harpsden is in line with our stated strategy of growing the wealth management division through both organic and inorganic growth.

“The progress we have made in reorganising our business is evidenced by our return to profitability and we now have a robust operating platform from which to build both businesses. The conditional acquisition will add assets to our platform and also strengthen key elements of our proposition for the future.

“We look forward to welcoming the Harpsden team and feel confident that we are creating a stronger and more capable wealth business with clear differentiation."