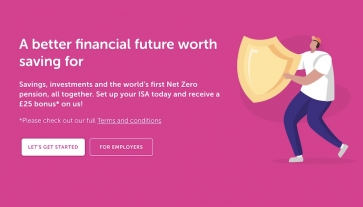 Workplace fintech Cushon has launched what it claims is the first ‘net zero’ pension.

Cushon says its pension offers ’net zero’ carbon emissions now and not a date in the future as it says some pension schemes have promised.

The firm has calculated that each year, the average UK pension scheme member “unwittingly” finances 23 tonnes of CO2 emissions through the businesses their pensions invest in. According to the company this is the equivalent of running either nine family cars each year.

Cushon says the launch meets the growing demand in the market for more environmentally-friendly products.

To achieve a net zero pension Cushon says it will use its own money to pay to offset any residual emissions created by customers’ pension investments. It is also working with ‘climate mitigation firm’ Vertree to select a range of projects which produce very low or zero emissions.

Ben Pollard, CEO of Cushon, said: “In 1995, the average carbon emissions per capita in the UK were 9.3 tonnes. Over the last 25 years we have actively managed to get this down to 5.6 tonnes, yet the way we invest our pension pots remains relatively unchanged and finances nearly four times our personal emissions.

“We know that people want their retirement saving to help tackle climate change without sacrificing returns. We wanted to find a very real way of making this work by delivering a pension that is Net Zero now.

“The idea of Net Zero investing is shamefully poorly developed within the fund management industry.  We work with three of the largest fund managers in the world, and only one of them was even able to tell us the CO2 emission levels of their funds.

“To ensure there is no impact on returns, having reduced the emissions financed by the funds as far as possible via solutions that are currently available ‘off the shelf’ from our fund managers, Cushon is paying to offset any residual emissions out of the company’s own money.

“We have worked with Vertree to select a range of Verified Carbon Standard (VCS) projects, with 75% of projects being triple, double or single gold rated under the Climate, Community and Biodiversity (CCB) Standard.”

The scheme is backed by film director Richard Curtis, co-founder of the Make My Money Matter campaign which encourages ESG investment.