Register for Financial Planning Today website for FREE to view more stories and get our daily newsletters. Click on 2 stories to see Registration pop up.
Tuesday, 19 January 2021 08:23 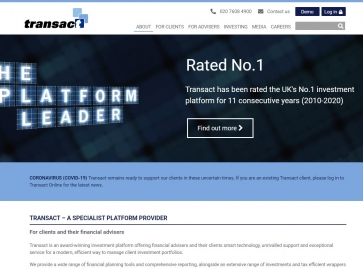 Funds under direction (FUD) at platform Transact totalled £44.82bn at the end of December, an increase of 9.1% over the previous quarter as gross inflows rose.

Over the same period the FTSE All Share Index rose by 11.9% and the MSCI World Index (Large and Mid Cap) rose 7.5%.

Inflows were £1.581bn and outflows were £741m for the quarter. Net flows were £840m, according to a quarterly update from parent company Integrafin.

Alex Scott, CEO of Transact, said: “With our highest ever first quarter gross inflows, we had a strong start to our financial year. Outflows increased broadly as expected in line with FUD and net flows were consequently 15% higher than in the previous quarter.

“Equity markets reacted positively to encouraging news on the development of Covid-19 vaccines as well as the outcome of the US election result, and this also contributed to the 14% increase in FUD over the same point last year.

“Whilst the operating environment undoubtedly remains unpredictable, these are positive indicators for the year ahead.”

In January Integrafin also pulled out of the race for a takeover of rival platform Nucleus Financial Group. It said it may change its position and make a bid, but only under a “limited set” of circumstances. It was one of four bidders that entered the race to acquire Nucleus late last year. Edinburgh-based Nucleus had opened itself up to bids after major shareholder Sanlam announced it would sell its stake.

More in this category: « PFS backs Financial Vulnerability Taskforce AFH to resume acquisition drive as revenues rise 4% »
back to top