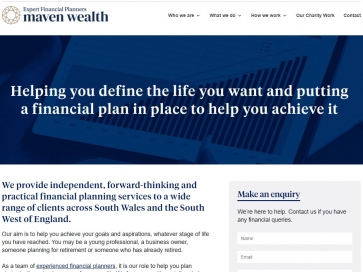 Chartered Financial Planner Mr Nixon has been part of the IWP group as chief executive of IWP’s Cornish hub Kelsall Steele Investment Services since June last year, a role he will retain.

Mr Nixon has over 20 years of professional experience in financial services, including at Legal & General, Sesame Bankhall Group and most recently Succession Wealth where he served as group compliance director and later Financial Planner.

The appointment is subject to regulatory approval.

IWP chose to rebrand its Welsh hub to reflect the broader range of services offered by the investment and Financial Planning firm.

Under Wes Nixon, Maven Wealth Management will focus on investment in technology and staffing and integration into the infrastructure of the IWP group.

Mr Nixon said: “We are pleased to announce our name change. Maven, meaning trusted expert, exemplifies our approach and the positive impact that our refreshed brand will have on our business.”

David Inglesfield, CEO at IWP, said: “We are delighted by the development of one of our founding firms. Maven Wealth Management Limited will continue to offer an incredible service to their clients and continuing their success in asset management. Wes has already made a significant impact with IWP and we are delighted to expand his responsibilities to running two of our founding firms.”