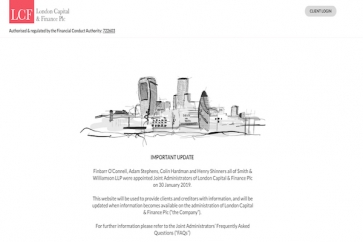 The Financial Services Compensation Scheme reported today that it has paid out just over £56.3m in compensation to 2,878 customers of collapsed mini-bond firm London Capital & Finance (LCF).

The FSCS update means nearly 8,800 LCF investors - who are likely to have lost nearly £180m in total - have so far not received compensation from the body.

In its latest update, the FSCS said it believes it is close to having identified and paid all LCF customers who it believes are eligible for FSCS compensation.

A number of legal cases are under way from LCF investors whose claims have been rejected as outside of the FSCS remit.

In its latest update, the body said that once its review of claims is complete it will await the outcome of the Judicial Review on LCF before confirming the next steps for those LCF customers who have not received FSCS compensation.

There has been criticism of the FSCS and FCA for a slow response to the LCF mini-bond firm collapse which saw more than 11,600 investors lose around £236m.

However, the FSCS has previously said it is proud of the service it has provided.

Shortcomings at the FCA call centre meant the watchdog failed to take early action on LCF during the collapse of the firm despite over 600 "red flag" calls from worried clients.

In evidence to the Treasury Committee earlier this month, ex-FCA CEO Andrew Bailey, now Governor of the Bank of England, said that at the time of the LCF issues emerging the FCA did not have a “mechanism” in place to spot red flag warnings on one firm from the 200,000 calls coming in a year.

The FSCS has blamed claims from the LCF mini-bond scandal for additional costs in its 2020/21 budget despite the fact that many LCF’s investors’ claims have been rejected as outside of the FSCS remit due, mainly due to them being only partly regulated.

More in this category: « Third of women under 44 in the dark about their pension FNZ submits detailed case against merger ban »
back to top