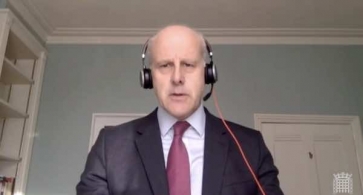 The FCA has scrapped performance-related pay and bonuses for senior FCA executives and is to cut average salaries for executive committee members this year following the £236m collapse of mini-bond provider London Capital & Finance.

The cuts follow criticism of the regulator’s handling of the failure of London Capital & Finance (LCF), a provider of so-called mini-bond’ investments which collapsed.

FCA chairman Charles Randell announced the pay hit this afternoon during questioning by the Treasury Committee of himself and new FCA CEO Nikhil Rathi.

Mr Randell said he was “profoundly” sorry for the mistakes over LCF and agreed that mistakes were made although he said there was no serious individual culpability of FCA executives who had accepted “collective” responsibility.

Asked about the role of FCA executive Megan Butler, he said: “The board did consider what the consequences should be for individuals and that’s why the board cancelled the performance-related pay for the executive committee for the 2019/20 year.

“We decided that the consequences which flowed from this should be collective,” he said.

Treasury Committee chairman Mel Stride MP said it seemed at the FCA as if the “buck never really stops anywhere.”

Mr Randell replied that the buck stops with him.

Former FCA CEO and now Bank of England Governor Andrew Bailey told the Treasury Committee in evidence recently that the FCA had missed 600 ‘red flag’ warnings from investors on LCF due to a lack of “machinery” to extract the warnings from hundreds of thousands of incoming calls to its call centre.

LCF ripped off more than 11,600 investors by encouraging them to invest £236m in non-regulated ‘mini-bonds’ before it collapsed. It had both regulated and non-regulated arms.

More in this category: « Google clamps down on 'unrealistic' financial ads LIBF launches new retirement planning qualification »
back to top