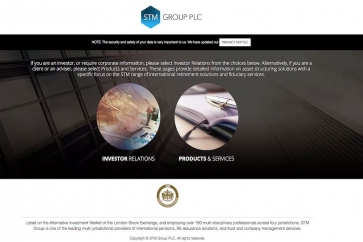 Financial services and SIPP group STM, the owner of the London & Colonial and Options SIPP businesses, has sold some of its Gibraltar-based businesses for just over £3m.

The company says the deal will help reinforce its focus on its core activities of pension administration and life assurance and will be used to fund growth and M&A strategy.

The companies being sold are STM Fidecs Management Limited, STM Fidecs Trust Company Limited, and STM Fiscalis Ltd, along with a number of non-revenue generating support companies, including nominee companies.

The businesses have been sold to the privately-owned Sovereign Group which has a significant presence in Gibraltar as well as offices in other jurisdictions that offer similar trust and company services.

The sale was approved by the Gibraltar Financial Services Commission, STM said.

Alan Kentish, chief executive of STM, said: “We are delighted that the businesses and our colleagues that work within them, as well as our clients, have gone to a good home at Sovereign, and I am sure that there will be a smooth and seamless transition.

“Exiting the Gibraltar trust and company business has been a key deliverable on the group’s roadmap and will allow STM’s executive management to focus on STM’s core activities of pension administration and provision of life assurance wrappers. The release of additional cash will be utilised towards further investment in the business where necessary, as well as contributing cash resources towards our inorganic growth strategy aspirations.”

In 2018 STM Group Plc announced it would move its HQ from Gibraltar to the UK following the arrest and release in 2017 of its chief executive.  STM’s board backed chief executive Alan Kentish following his arrest in Gibraltar over allegations related to a tax dispute with a former client and alleged failure to disclose the proceeds of crime.

STM said the arrest came approximately two years after STM itself filed two Suspicious Activity Reports to the Royal Gibraltar Police during a tax dispute with the client. Police ended their investigation into Mr Kentish with no further action taken.

More in this category: « 1.6m pension savers hit by MPAA trap FCA launches campaign to support whistleblowers »
back to top