Register for Financial Planning Today website for FREE to view more stories and get our daily newsletters. Click on 2 stories to see Registration pop up.
Tuesday, 06 April 2021 07:50 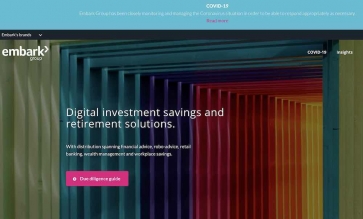 Outgoing chairman for the retirement solutions and platform provider, David Etherington, has held the position for three years, with a total of eight years at the group.

Mr Barral has held a range of governance roles as chairman of Virgin Wines, independent customer champion of Old Mutual Wealth’s Customer Outcomes Forum, and was chairman of the Association of British Insurers retirement and savings committee.

In February Embark reported it had migrated over £7 billion of advised assets onto the Embark platform from the client books of Alliance Trust Savings (ATS), including those from trading service provider Stocktrade, which it acquired in October 2019.

The takeover of ATS’s client book means that Embark’s platform now hosts the savings and investments of more than 41,000 additional clients and 30,000 accounts. More than 100 ATS employees have also joined the Embark team.

The acquisition increased overall Embark assets under administration to £38.5bn for about 415,000 consumer clients.

The Openwork Partnership and Embark Group recently extended their existing distribution agreement to 2026 after a “successful year working together.”

The two business announced today that they have agreed terms on extending their existing distribution agreement after a year of due diligence following Embark’s acquisition of Zurich’s investment and retail platform in 2019.

Openwork is one of the largest distribution partners of Advance by Embark, with the majority of the partnership’s wealth advisers on the platform.