Keith Richards to step down as PFS CEO 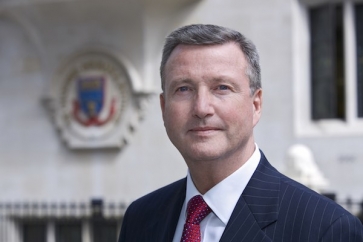 Keith Richards will step down at the end of June

Keith Richards is to step down as chief executive of The Personal Finance Society (PFS), the professional body which runs the Chartered Financial Planner designation, on 30 June.

Mr Richards was appointed as CEO in 2013 following the implementation of the Retail Distribution Review.

It is not yet known what his next role, will be nor in which sector, and no details have been released so far about his replacement.

Over the past eight years he has overseen the growth of the PFS and has become a respected voice with regulators and governments, representing the voice of UK Financial Planning professionals both in the UK and internationally.

He has been an advocate of several key consumer initiatives including the pro bono programmes of MoneyPlan with Citizens Advice, Forces MoneyPlan for Veterans of the Armed Forces and My Personal Finance Skills, working with schools across the country.

He has also overseen the setting up of the European Financial Planning Association-UK mutual recognition qualification programme and the cross-sector Pensions Advice Taskforce and Financial Vulnerability Taskforce launched in January 2021.

He has lobbied for the PFS on a number of key issues and contributed to a number of working parties, including the government's implementation group for Pension Freedoms, DWP and the HMRC intermediary forums and the HMT/FCA Financial Advice Market Review.

Following the instigation of the CII’s Strategic Manifesto in November 2016, Mr Richards took on the additional role of MD of Engagement which later changed to Chief Membership Officer and created three membership Societies for Insurance Broking, Claims and Underwriting as well as the relaunch of the Society of Mortgage Professionals.

Sarah Lord, president of the PFS, said: “On behalf of the members and directors of The Personal Finance Society, I would like to thank Keith for all that he has done during his time as CEO.

"He has led the evolution of the society to the Financial Planning community’s leading professional body and, importantly, through his work with members, policymakers and consumers he has played a significant role in raising the profile of our profession, for which, we are all grateful.”

Kevin O'Donnell, Editor of Financial Planning Today, said: "Keith has been an energetic and professional campaigner and ambassador for the PFS for many years. He will be much missed by journalists and industry professionals for his tenacious work for the planner sector."