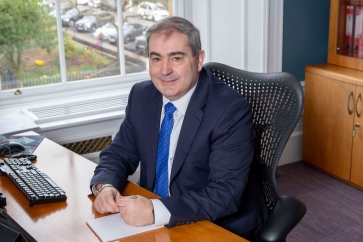 Scottish Friendly CEO Jim Galbraith has died after over 30 years at the mutual.

His role at the Glasgow-based mutual will be taken by the current deputy chief executive Martin Pringle, the society announced today.

Scottish Friendly said Mr Galbraith had been at the “heart” of the society for over 30 years, showing unlimited passion for the mutual life office and helping build its success.

Recently he won the IoD Scotland Director of the Year award, capping several years of growth for the business.

He had worked for Scottish Friendly for 33 years and prior to that at Scottish Life as a marketing actuary.

Mr Galbraith was known for his “presence, dry humour and friendship,” the society said. He had built an experienced team focused on “maintaining the historic vision for the mutual.”

“He believed fundamentally in the mutual ethos of Scottish Friendly and had a keen sense of its heritage and historic mission. To that end he built an incredibly deep and strong team committed to our vision and dedicated to continuing Scottish Friendly’s successful strategy. It is for us, the employees of Scottish Friendly, to honour his faith in us and continue to deliver for our current and future members.”

David Huntley, chair of Scottish Friendly, said: “This is, understandably, a terrible shock for all of us at Scottish Friendly and our thoughts and prayers are with Jim’s family at this difficult time. We are also providing support to our staff, many of whom have known Jim for a significant amount of time.”

The cause of death or circumstances have not been released.