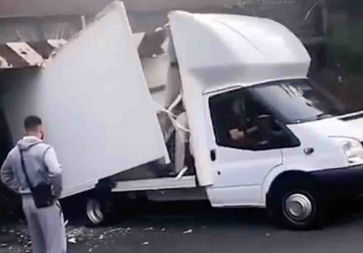 Van disaster from the campaign

The Financial Services Compensation Scheme has hired TV comedian, author and actor David Mitchell, one of the captains on the popular BBC show ‘Would I Lie to You’, to front a ‘video disaster’ campaign highlighting what happens when people fail to check.

The long term campaign will encourage people to check at the outset that their investments and pensions are protected by the FSCS.

The campaign features TV 'blooper-style' videos of people suffering disasters, including a van destroyed after going under a low bridge and a bride washed off a rock at the seaside after posing for a photo.

The latest campaign, running on radio, TV and online, will promote the importance for investors of checking that new and existing pensions and investments products are FSCS protected.

The FSCS said: “Ultimately, we want our target audience, who lean towards the older end of society, to feel more empowered and confident in checking protection specific to their provider and product.”

The campaign will run during the rest of this year and into 2022. The first burst of activity began on 29 March and will run until the end of May. The campaign is currently live across radio, video on demand (including ITV Hub and All 4), social media and print magazines.

The FSCS says it is running the campaign now because it is seeing increasing numbers of customers seeking compensation from the FSCS due to failed pension and investment products. It says the campaign will stress that checking FSCS protection is available can head off disasters later.

The FSCS declined to give a specific cost for the campaign but said it was covered by its overall marketing budget which is £2.6m annually and has remained the same for four years.