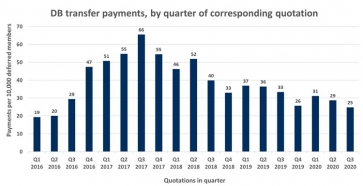 The number of DB transfer requests has fallen dramatically since the FCA introduced a ban on contingent charging last year, according to analysis from actuarial firm LCP.

The FCA banned contingent charging - a fee paid to pension transfer advisers only when a transfer proceeded - in October 2020 amid concerns the practice was resulting in unsuitable transfers taking place.

The transfer numbers were the lowest since early 2016 and reflected only 19% of quotations issued in the quarter being paid out.

Q3 2020 is the latest quarter with full transfer payment experience available due to the lag between a quotation being issued and the corresponding payment being made, typically three to six months.

LCP says that DB transfers have been gradually declining in recent years due to regulatory and other concerns about transfers, particularly their misuse by some scammers, but the firm believes the latest drop can be “directly linked" to the ban on contingent charging.

A number of Financial Planners have quit the DB transfer market due to issues in securing professional indemnity insurance although many still transact transfers. LCP says some advisers appear to have switched from contingent charging to higher up-front advice fees.

Keith Richards, chief executive of the Personal Finance Society, warned last year that the contingent charging ban could significantly reduce the number of transfers and make affordable pension transfer advice harder to get.

According to LCP the data shows:

Bart Huby, partner at LCP, said: “It’s clear that the ban on ‘no transfer, no fee’ arrangements is already having a significant impact on transfers. While this should be welcomed because it means that members are less at risk of potentially compromised advice, there is a danger that members may find the market too pricey and so not progress past the quotation stage. The fact that take-up rates for smaller transfers have decreased sharply in the last quarter is already indicating this may well be the case.”

Andrew Pijper, associate consultant at LCP, added: “While the contingent charging ban is keeping transfer take-ups low, the green shoots of post pandemic recovery can be seen in the rise in the number of new transfer quotations. While it’s too early to say whether this increased activity will translate into more transfer payments, the indication is that more members are starting to plan for their financial future again as the pandemic recedes and life gradually returns to normal.  Whether all these members will be able to access affordable advice is, however, another question.”

More in this category: « Tilney recruits new Financial Planner from Aviva Fidelity Intl CEO Richards becomes a Dame in honours »
back to top