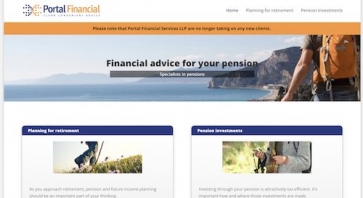 Pension adviser Portal Financial Services LLP has shut its doors to new business following a string of complaints to the Financial Ombudsman Service, many brought recently by Claims Management Companies.

The company, which previously traded as Portafina, applied to the FCA to cancel its permissions on 18 June after a surge in complaints over the past year.

Its website says the company has now shut to new business although the firm said in a statement today it was "restructuring."

The firm was involved in pensions, retirement advice and pension transfers.

It is believed that dozens of complaints about the firm's advice have been made to the Financial Ombudsman Service.

The Financial Ombudsman Service confirmed to Financial Planning Today that during the period July – December 2020 around 60% of complaints were brought to the FOS by Claims Management Companies (CMCs).

The Ombudsman said that clients unhappy with financial advice received from any financial company covered by the FOS should make a complaint in the first instance direct to the business and if they are not happy with the response can complain to the FOS.

Portal, which is not connected to Portal Financial Planning in Huddersfield, was registered at an office in City Road, London EC1. The firm has been hit by a number of claims to the Financial Ombudsman Service over the past few years.

In 2018 the Ombudsman ruled against Portafina after a client complained he was advised to transfer his rebate-only personal pension to a SIPP by Portafina. Most of the funds were then invested in unregulated collective investment schemes (UCIS) that Portafina recommended.

The client, a factory worker on a modest income, says that he wanted “low to no” risk investments, but the investments he was recommended were high risk. His attitude to risk was recorded as “moderately cautious.”

Portafina claimed that its advice to invest 85% of his SIPP funds in UCIS was “reasonable.” The FOS adjudicator agreed with the client, saying the advice was "unsuitable."

A Portal Financial Services spokesperson said today: "Over the past four years, we have been restructuring our business and this means that Portal Financial will no longer be providing financial advice. We have written to all clients informing them of this decision and will support them with any questions on what to do next.”