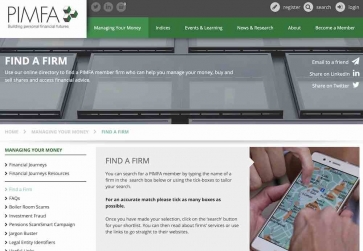 Wealth management trade association PIMFA has called for the Financial Conduct Authority (FCA) to come forward with tangible, tested proposals to introduce friction into the consumer journey with respect to financial promotions.

PIMFA said the FCA should adopt an approach which focuses on consumer protection balanced against their own personal responsibilities.

The trade association, in response to the FCA’s discussion paper on strengthening financial promotions rules for high risk investments, said any approach must ensure that those who could reasonably benefit from higher risk investments are not inadvertently excluded from them as a result of frictions which encourage consumers not to deal when they should.

Simon Harrington, senior policy adviser at PIMFA, said: “The current investor exemptions for higher risk investments are not fit for purpose. While we welcome the intent of this discussion paper it is somewhat disappointing that many of the proposals put forward within it have been tested against how they impact on consumer behaviour.

“We believe there is scope in testing a number of these and believe the FCA should return in the near future with a consultation, which evidences how consumer behaviour is impacted with the positive frictions, which it introduces in this discussion paper.

“More broadly, it is disappointing that the direction of travel for the approval of financial promotions seems to be that the government and regulator are seeking to make tweaks to the existing regime rather than overhaul it. As we set out to the Treasury in our response on the approval of financial promotions, we believe that this should, ultimately, be a regulated activity. We have enhanced concerns about businesses who see this activity as a viable revenue stream and this in combination with a lack of regulatory oversight will only continue to introduce harm into the market.”