Register for Financial Planning Today website for FREE to view more stories and get our daily newsletters. Click on 2 stories to see Registration pop up.
Friday, 09 July 2021 11:52 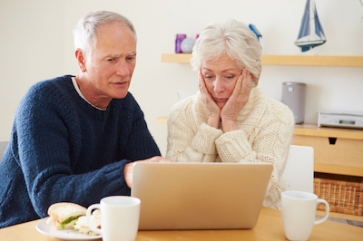 Over half of over-50s fear they will run out of money in retirement due to the impact of the pandemic on their income and their ability to save, a new survey has revealed.

The pension provider wants action to help older works save once more into a pension if they have dipped into their pension but want to re-enter the workforce later.

Dipping into pensions can cause unexpected tax bills for anyone planning to re-join the workforce, Scottish Widows has warned.

Re-entering the workforce after drawing on a pension can expose those who have dipped in to pensions to punitive tax charges. Many who dip into pensions early will face the Money Purchase Annual Allowance which will restrict future pension contributions to £4,000 per year and make rebuilding pensions difficult.

The survey, covering more than 5,000 UK adults, found that 53% of people in their 50s fear their money will run out during retirement.

According to Scottish Widows this group was the most likely of any age group to face job and income losses during the pandemic (23%).

In addition, the number of those over 55 dipping into their pension early rose sharply this year as many faced a loss of income during the pandemic. In the first three months of 2021, 383,000 withdrew money from their pension, a 10% increase on the same period last year.

The latest Scottish Widows Retirement Report, due to be published soon, will reveal that one in three people in their 50s (37%) say they have taken a hit to their finances during the pandemic, more than any other age group. Some 13% believe they will never be able to afford to give up work.

Scottish Widows also points out that some 17% of people in their 50s are self-employed, compared to only 12% of 25–49-year-olds. More than half of people who work for themselves have seen their finances suffer, compared to 25% of permanent employees, says the firm.

Pete Glancy, head of policy at Scottish Widows, said: “Retirement may start to seem like an impossible dream for a group of people who have already spent 30 plus years in the workforce and if we’re to ensure a whole generation is not condemned to work until they drop, urgent government action is needed.

“We’re calling for MPAA rules to be temporarily suspended for older workers to help them get their savings back on track during these extraordinary times without being penalised. This should be coupled with action to create greater awareness of MPAA rules to ensure savers can make informed financial decisions.”

“In addition, an auto-enrolment-type scheme for the self-employed, who have fallen through the cracks of state support during Covid would make a real difference. We also need continued signposting to financial advice, so that older savers know the true cost of lost contributions today, on their retirement plans for tomorrow.”

• Research was carried out online by YouGov for Scottish Widows covering 5,059 adults aged 18+ in March and April.

More in this category: « Ex-Pensions Minister warns against quick axe for Triple Lock 7.6m Britons hit by pension scam attempts  »
back to top