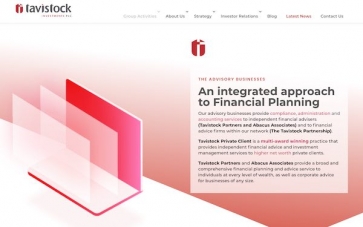 Shareholders in wealth manager and Financial Planner Tavistock Investments have voted at a general meeting in favour of selling the firm's multi-asset arm, Tavistock Wealth Limited, to Titan Wealth Holdings for £40m plus an earn-out.

Tavistock Investments reported today that 56.33% of shareholders (342.4m shares) supported the sale with only 30 shares cast agains the deal which had received opposition from some shareholders earlier in the process.

The company said it was pleased with the results of the vote to approve the disposal of Tavistock Wealth Limited (TWL) and to grant authority for the company to make market purchases of its own shares.

In June Tavistock Investments announced a 10-year strategic partnership with Titan which will see Titan acquire TWL for up to £40m in cash, together with a ten-year earn out.

The disposal of TWL will complete once Titan has received change in control approval from the FCA.  The company says a further announcement will be made once approval has been received.

Brian Raven, chief executive of Tavistock, said: "The strategic partnership with Titan will enable us to accelerate the growth of our wealth management business both organically and through an acquisition programme, endorsing our corporate strategy. I am pleased that shareholders have recognised the opportunity presented by the deal, enabling us to deliver them greater value."

Titan will acquire Tavistock Wealth for up to £40m with £20m paid on completion of the deal, with a further £20m paid in equal annual instalments over the following 3 years, linked to the maintenance of Tavistock Wealth's revenues.

More in this category: « Frenkel Topping on the hunt for more acquisitions 1 in 10 over 40s considering equity release »
back to top