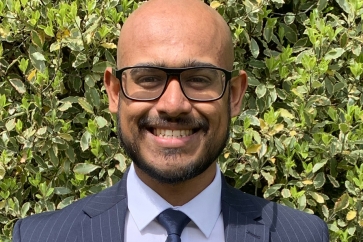 He is being groomed to take over from his father, Dinesh Prema, also a Chartered Financial Planner.

The financial advisory firm is based in Hinckley, Leics. It was set up from scratch by Ravi’s father Dinesh Prema in 1996 with no clients.

Dinesh Prema built up the firm, which focuses on 120 HNW families, initially with the help of the Berkeley Independent Adviser Network. After the Berkeley Network dissolved, Prema joined Tenet in 2007.

Dinesh said: “It was around 10 years ago that I asked Ravi to join the business. His initial response was, ‘no thank you!’. It’s great for us that he changed his mind.”

With the firm’s 25th anniversary celebrations this year Dinesh has now decided to pass on the reins to his son Ravi. He said: “I am now 60 but had started to take succession planning seriously around seven years ago. We have a wonderful client base, some of whom we’ve known for more than 10 years. We consider them friends more than clients.

Ravi said: “I was always interested in working in the finance sector after studying Economics at A Level. I knew that going to university and looking for another role would be venturing into the unknown. My father has always said how much he enjoyed his work.

“The goal was always to become chartered straight away. My dad and I agreed that the best approach would be for me to try and get my qualifications as soon as possible, whilst I was still in ‘study mode’ after school.”

Ravi, who plans now to study for his PFS Fellowship, began his chartered journey after joining a government-backed apprenticeship scheme. He also enjoyed monthly coaching meetings.

Financial advice could be something that runs in the family as Ravi’s sister is now planning to study Economics at university.

Mark Hutchinson, societies and member marketing director at the Chartered Insurance Institute, said “It’s great to see the journey that Ravi has been on since starting his chartership. Becoming a Chartered Financial Planner at just 23 is no mean feat and it’s an achievement that requires real determination.

“It’s always heartening to see someone so young show such a passion and aptitude for our industry. This is especially true knowing that Prema Financial Services will be in his capable hands going forward, as the firm passes from one generation to the next. We wish him every future success in his new role.”

Raul Robson, head of business support at Tenet, said “We’re really proud of Ravi’s achievement and glad that we could support him on his journey to Chartered as he takes Prema to the next phase in its history.”

More in this category: « Paraplanners Assembly plans space-age conference Profits dip at HL but client numbers surge »
back to top