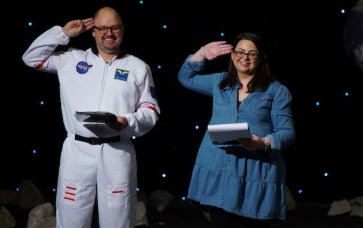 One of the UK’s biggest Paraplanning events is considering a return to a live event next year - but with the option for attendees to take part virtually instead.

This year’s event, which had a space age theme and was held on the ‘Paraplanet’, was held virtually for the second year in a row earlier this month but with some members missing the in-person approach of previous years's live events.

Next year's event may be held as a live in-person event, depending on Coronavirus restrictions, but with the option for attendees to take part virtually if they prefer.

Many in-person events over the past 18 months have been cancelled or converted to online events due to the pandemic. Recently, live in-person events have begun to return as pandemic restrictions have eased.

Paraplanner Assembly founder and Paraplanner Richard Allum said: “We’re looking at hybrid but don’t want to diminish the experience so are keeping all options open.

“We’d like to be in person but are mindful of the large number of people who’ve been able to participate over the last two years who can’t get to the in person event. We’re thinking of a way that will include everyone who wants to join in.”

Nearly 100 Paraplanners took part this year in the conference and training event online, billed as ‘The Big Day Out of this World.’

Co-host Jonny Stubbs said: "I co-hosted the Big Day Out last year from the beach at Paraplanners Paradise and the chance to make the trip to Paraplanet was too good to resist."

"Having arrived at Paraplanet, passengers were split into five groups. Each group set off to a destination in the solar system where they spent the day tackling a range of topics that they'd voted to discuss including tax and trusts, ESG, retirement planning, compliance, and wills, powers of attorney and deeds of variation."

"This year, Caroline and I also joined a 'Crater Chat' session on advice technology – a panel debate led by Next Wealth's Heather Hopkins featuring Emery Little's Marcus Farnfield and Assembly founder, Richard Allum. I realise I'm biased but it was a really rich and varied debate. It was great to participate in and, hopefully, to tune into for participants in the event."

Fellow co-host Caroline Singleton said: "For the second year in a row, the Paraplanning community really entered the spirit of the event. Despite being apart, Assembly events always gave Paraplanners a chance to gather together and feel part of something bigger – and it feels like that remains the same online."

"The quality of discussion is always consistently high – not least in the Big Huddle. This is the session towards the end of the day where participants gather together to discuss the big issues that they'd voted to exchange views and ideas about."

"We limited the number of available spaces to 100 participants this year so everyone attending could get on screen during the sessions. In total, 97 participants spent the day with us."

Tweet
This page is available to subscribers. Click here to sign in or get access.
Published in Articles
More in this category: « Covid-19 deaths help fuel surge in IHT receipts Pandemic hits women’s pension confidence »
back to top