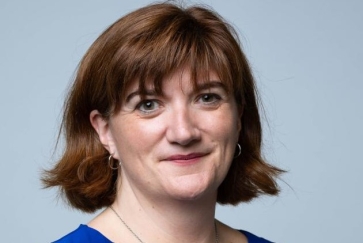 Baroness Nicky Morgan is to become the first independent chair of the ABI as the insurance and savings body restructures its senior management.

She replaces Jon Dye who is stepping down after two years as ABI chair.

Hannah Gurga has also been appointed director general of the trade body, replacing Huw Evans who will step down to join KPMG in December.

Baroness Dianne Hayter will also join the ABI as an independent non-executive director (iNED) and will become the senior independent director on the ABI Board.

Both Board appointments are for a period of three years.

Baroness Nicky Morgan is a former MP, cabinet minister, and chair of the House of Commons Treasury Committee. She is now a member of the House of Lords. She is a qualified solicitor with a specialism in mergers, acquisitions and advisory work. She is also a non-executive director of Santander UK and chairs Westminster think-tank the Advisory Board for Reform.

Hannah Gurga joins the ABI from UK Finance where she is currently managing director, digital, technology & cyber and chief of staff. She has previously worked for the London Stock Exchange Group, ICAP and HM Treasury alongside other Government roles

Baroness Dianne Hayter most recently served as the shadow deputy leader of the House of Lords before stepping down to become chair of the Lords International Agreements Select Committee in October. She was formerly a board member of the Financial Reporting Council’s Board of Actuarial Standards, the Determinations Panel of The Pensions Regulator and the Insolvency Practices Council. She was previously vice-chair of the Financial Services Consumer Panel.

Ms Gurga said: “The ABI is globally recognised as a leading advocate for the insurance and long-term savings industry, and I am committed to building on its reputation to ensure we help members deliver the best outcomes for their customers.

“The external environment in which we’re operating is changing rapidly and it is vital that the ABI delivers across issues as varied as climate change, diversity and inclusion, resilience and the digital and data revolution. I look forward to working with members, colleagues, government and regulators to enhance our industry’s reputation and impact.”

These appointments are the latest in a senior management reshuffle.

Earlier this year Barry O’Dwyer, group CEO of Royal London took on the role of ABI President and Christina Nestares, UK CEO of Admiral Group, took on the ABI’s deputy president role. The two roles provide the public-facing leadership of the trade body.

The two new board roles were introduced as part of the reforms announced by the trade body earlier this year.

The restructure of the senior management team is to bring in “fresh external perspectives, enrich diversity of experience and reinforce strong governance”.