Register for Financial Planning Today website for FREE to view more stories and get our daily newsletters. Click on 2 stories to see Registration pop up.
Friday, 19 November 2021 07:40 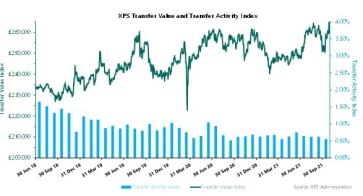 The new peak surpassed the previous record of £264,300 hit on 24 August, according to the XPS Transfer Watch.

XPS said the October increase was driven by continued high future inflation expectations combined with a dip in gilt yields.

The Transfer Activity Index showed 56 members out of every 10,000 transferred their pension in October, a slight fall from the 62 seen in September.

Mark Barlow, partner at XPS Pensions Group, said: “Transfer values reached another record high in October, largely due to high inflation expectations and low gilt yields. Despite this, transfer activity has yet to recover to pre-pandemic levels, perhaps a result of members finding it more challenging to access financial advice.”

The Red Flag Index remained below 50% for a third successive month, with 47% of transfers showing at least one warning sign indicative of a potential scam or poor member outcomes.

Trustees were given new powers to half suspicious pension transfers by The Pensions Regulator earlier this month.

The regulations introduce a system of red and amber flags, giving pensions trustees the power to refuse transfers where there is a high risk they may be part of a scam.

They will come into force at the end of the month.

Helen Cavanagh, client lead, member engagement hub, at XPS Pensions Group, said: “The strengthening of transfer regulations is a major step forward, as it now gives trustees real power in the fight against pension scams. However, the new regulations present a major challenge to trustees, who need to act now to ensure that they are able to comply when these changes come into effect at the end of this month.

“It’s also important to remember that satisfying the conditions in the legislation doesn’t mean that a transfer isn’t a scam. We encourage all trustees to continue looking out for other scam warning signs to protect their members and their schemes.”

XPS Pensions Group’s Transfer Value Index shows the estimated Cash Transfer Value of a 64-year-old member with a pension of £10,000 a year with typical inflation increases

XPS Pensions Group’s Transfer Activity Index represents the annualised proportion of members that transfer out of pension schemes administered by XPS. If replicated across all private sector, funded, UK, DB schemes this indicates that approximately 50,000 DB members leave their schemes each year.

XPS Pensions Group’s Red Flag Index tracks the percentage of monthly transfers reviewed by the businesses’ scam protection service that are identified as having warning ‘red flags’ which indicate that the member is at risk of being scammed. The red flags are based on the Pension Scams Industry Group’s Code of Good Practice.

More in this category: « Frenkel Topping enters 6th JV with law firm ESG enthusiasm may be waning - survey »
back to top