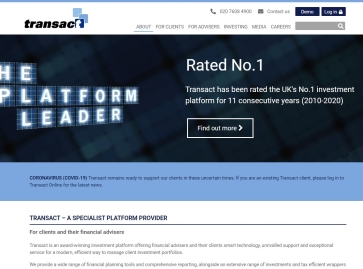 Transact is looking to create a “shop window” for buyers to anonymously confirm their interest in sellers.

Adviser platform Transact has stepped up its efforts to act as an introducer for advice firm acquisitions.

The platform has launched a series of virtual workshops for buyers of advice firms.

The virtual workshops will be hosted as recorded webinars on Transact’s website in the New Year to help advice firm buyers to formalise their own strategies.

The platform is also looking to create a “shop window” for buyers to anonymously confirm their interest in sellers.

In its recent succession planning update, the platform also said that it has seen a trend towards advice firms looking at preserving their legacy through management buy-outs and Employee Ownership Trusts.

Transact claims that nearly all of the introductions it has made have “resulted in happy sellers and buyers concluding deals” but over the past year has “seen a move towards firms realising that change isn’t necessarily for the good.”

Transact has seen strong inflows from advisers into its platform this year.

The fourth quarter for the platform saw its highest ever inflows. Outflows remained steady for the quarter at £660m, leaving net flows of just over £1.3bn.

For the financial year as a whole, advisers placed over £7.6bn with the platform.

Staff returned to the platform’s City of London-based HQ from August with the firm piloting a hybrid working model with a minimum of three days each week in the office for full-time staff.

The platform, popular with Financial Planners, in September said growth has been held back recently by a struggle to increase staff as quickly as planned due to recruitment issues.

The platform has been recruiting throughout the year, and continues to do so, but says growth in staff numbers has been a challenge.