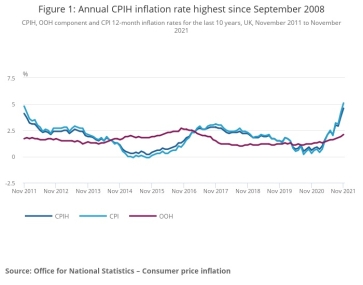 The Consumer Prices Index (CPI) hit 5.1% in November, the highest rate in over 10 years.

Rising fuel costs and higher prices for second hand cars were two of the main components in the rise which may put pressure on the Bank of England to increase interest rates.

The biggest contributors to the November CPIH 12-month inflation rate came from transport, including fuel costs and second-hand cars, and rises in housing and household services.

Despite the price rises there were downward effects on inflation from restaurant and hotel costs.

ONS chief economist Grant Fitzner said: “A wide range of price rises contributed to another steep rise in inflation, which now stands at its highest rate for over a decade.

“The price of fuel increased notably, pushing average petrol prices higher than we have seen before. Clothing costs - which increased after falling this time last year - along with price rises for food, second-hand cars and increased tobacco duty all helped drive up inflation this month.

“The costs of goods produced by factories and the price of raw materials have continued to increase significantly to their highest rate for at least twelve years.”

Rising inflation is beginning to change some clients investment approach, some planners said.

Graeme Inglis, Chartered Financial Planner at Scotland-based Poise Financial Planning, said: "We are speaking daily with our clients about the impact of inflation, which is now soaring. We illustrate the real return, after inflation, of their investments. We are seeing clients who would not have considered investing money opting to invest due to the combination of decade-high inflation and lower than usual bank rates."

Joshua Gerstler, Chartered Financial Planner at Borehamwood-based The Orchard Practice, said: "Some who have previously seen bank accounts as a safe haven now realise that this is in fact one of the worst places to leave your wealth, and that a well-diversified investment portfolio is the way forward."

Sarah Coles, senior personal finance analyst at D2C platform Hargreaves Lansdown, said: “Record petrol prices helped fuel the fastest inflation in a decade, alongside eye-watering rises in the cost of gas and electricity, horrible hikes in the price of maintenance and repairs and slower but unrelenting increases in the price of food. Meanwhile, big ticket items like second hand cars and new furniture are breaking the bank.

"It’s worth pointing out that part of runaway inflation figures is that we’re comparing prices to a much slower period last year, when lockdowns meant much of the country reined back spending, so shops slashed the price of clothes and shoes in an attempt to persuade us to keep shopping. Last November prices fell 0.1% in a month. So price rises aren’t quite as bad as they seem – but they’re still pretty terrible."

Derrick Dunne, CEO of YOU Asset Management, said: “UK inflation blew expectations out of the water this morning, with the CPI reading jumping 5.1% in the twelve months to November (up from 4.2% in October) – months ahead of the IMF’s prediction that we’d reach that level in Spring next year."

• This is a developing story. Check back later for reaction to the CPI figures.

More in this category: « Canaccord to buy Punter Southall Wealth for £164m Govt could push back State Pension Age for millions »
back to top