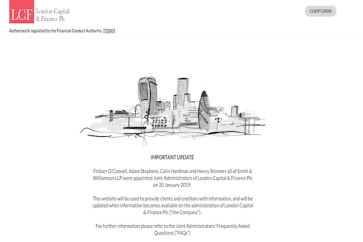 The Financial Services Compensation Scheme (FSCS) has paid out £91.1m to 7,750 LCF bondholders under the government’s compensation scheme in three weeks.

The first letters were sent in November.

Over 10,000 cheques have been issued, with 84% of eligible bondholders receiving compensation under the scheme.

The FSCS said this morning that it expects another 200 bondholders to receive compensation by the end of the year.

The other remaining offers involve more complex calculations and the FSCS estimates their compensation will come through in early 2022.

The compensation body said it expects all LCF bondholders eligible under the government scheme to receive their offer by 20 April.

The government expects to pay out £120m in total under its scheme to 8,800 victims hit when mini-bond firm LCF collapsed. The FSCS is administering the scheme for the government.

The recipients of the new government-funded payouts are those who have not already been compensated by the FSCS directly.

The Financial Services Compensation Scheme has already paid more than £57m to 2,800 LCF bondholders but many LCF victims were not covered by the FSCS scheme due to gaps in how LCF was regulated by the FCA.

Some 11,625 investors lost savings worth a total of £237m when LCF collapsed, with the majority facing heavy losses until the government stepped in to provide compensation after a campaign to expose regulatory failings.

Under the government scheme eligible bondholders invested in ISA bonds with LCF will receive a standard compensation letter plus an additional letter from FSCS with the details they will need to show their ISA manager. These letters will arrive separately, and batches are being sent out frequently.

Bondholders who held ISAs with LCF can use the compensation payment to make a single payment into another ISA without it counting towards their annual subscription limit.

Those still waiting for an additional ISA letter can still cash their cheque from the FSCS for compensation in the meantime.