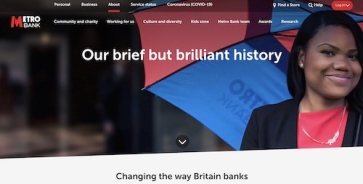 It’s the second fine for governance failings announced by the PRA this week after it fined Standard Chartered Bank £46.5m on Monday for failing to be “open and cooperative” and for failings in governance.

The PRA says Metro Bank failed to “act with due skill, care and diligence” in relation to the regulatory reporting of its capital position.

The regulator, part of the Bank of England, said Metro Bank was responsible for failings in its regulatory reporting governance, controls and investment with respect to its returns sent to the PRA between 13 May 2016 to 23 January 2019.

On 23 January 2019, Metro Bank announced that it had adjusted the risk weightings of some commercial loan portfolios on its balance sheet to reflect corrections that it had made.

Sam Woods, deputy governor for Prudential Regulation and chief executive of the PRA, said: “We expect firms to invest appropriate and adequate resources to ensure that they submit accurate regulatory returns. In this case, Metro Bank failed to meet the standards of governance and controls expected of it, resulting in today’s enforcement action.”

Firms are required to submit periodic financial information to the PRA as part of the regulatory reporting framework. These returns include quarterly reporting on a firm’s current assessment of its risk weighted assets (RWA).

On 23 January 2019, Metro Bank announced to the market that it was making an adjustment to its assessment of its RWA for December 2018 of approximately £900m as a result of Metro Bank having applied the incorrect risk weighting to certain commercial loans.

In the years before the 2019 Announcement, Metro Bank pursued rapid growth and expansion and increased its number of high-street branches and customers, growing core deposits and lending.

However, during this time, it failed to ensure the commensurate development of, and investment in, governance arrangements and systems and controls relating to its reporting, the PRA said.

More in this category: « FNZ sells GBST platform to private equity firm  Wealthy are most likely to be scam victims »
back to top