Register for Financial Planning Today website for FREE to view more stories and get our daily newsletters. Click on 2 stories to see Registration pop up.
Wednesday, 19 January 2022 15:34

CISI CEO Culhane to step down after 18 years 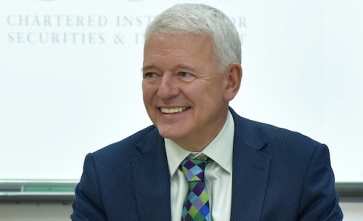 The long-serving CEO of the Chartered Institute for Securities & Investment (CISI), Simon Culhane Chartered FCSI, will step down in September after 18 years in the role.

After stepping down as CEO he will take up a temporary international 'ambassadorial' role for the CISI.

The decision means both the CISI and rival professional body the CII are seeking new CEOs this year.

Financial Planning Today has asked both bodies for comment about whether this would make a merger between the two organisations more likely, a long rumoured possibility.

However, both the CISI and CII told Financial Planning Today that no merger discussions are taking place and there are no plans to merge. Both bodies are members of the Chartered Body Alliance, which oversees joint campaigns between the bodies and third member, the Chartered Banker Institute.

The CISI is a global professional body based in London and responsible for many financial qualifications, including the Certified Financial Planner designation in the UK.

Mr Culhane was appointed in May 2004 as CEO of The Securities Institute - a predecessor of the CISI - which then had 65 staff, all UK based.

The CISI has expanded over many years both in the UK and globally and now looks after members in the wealth, Financial Planning and capital markets sectors with 45,000 members worldwide and 40,000 exams taken during a typical year. Its qualifications are recognised in over 70 jurisdictions, the CISI says.

The CISI has 26,000 fully qualified members with the remainder of the 45,000 global members holding student membership.

The body has members in over 75 countries. It has offices in nine countries around the world including Colombo, Sri Lanka where another 75 staff operate.  Its London headquarters (at 20 Fenchurch Street, also known as the “Walkie Talkie” building) employs 110 staff.

Mr Culhane said: “It has been a real honour and privilege to hold this position, for what will have been 18 years - which have gone by in a flash. I feel that now is the right time to step down, after we celebrate our 30th Anniversary this year.”

CISI chair Michael Cole-Fontayn MCSI said “The board of trustees recognise the significant contribution and dedication Simon has given to the institute over nearly two decades as its CEO. Today, the CISI is a resilient and financially secure global body, which is widely respected by regulators and firms for its professionalism, qualifications, Continuing Professional Development and focus on integrity.

"Simon has been instrumental in the growth of our global community of members and has built many important relationships around the world which contribute to its success; therefore, it would be our intention to engage Simon in an international ambassadorial role for an appropriate period.”

The CISI board has begun the search process to recruit a new CEO.

More in this category: « Q&A with Life Planning guru George Kinder 38% net growth in advised customers at AJ Bell »
back to top