Register for Financial Planning Today website for FREE to view more stories and get our daily newsletters. Click on 2 stories to see Registration pop up.
Wednesday, 26 January 2022 09:22 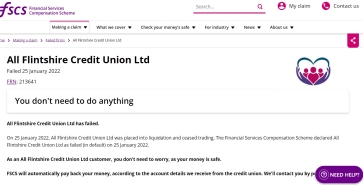 The FSCS expects the total compensation for All Flintshire Credit Union to be around £2.25m.

A North-East Wales credit union has been declared in default by the Financial Services Compensation Scheme (FSCS).

All Flintshire Credit Union was declared in default yesterday.

The FSCS expects the total compensation for All Flintshire Credit Union to be around £2.25m.

It aims to compensate the 2,614 members of the credit union, which is in Holywell, Flintshire, North East Wales within seven days.

The compensation body will send each member a cheque for their balance automatically using All Flintshire Credit Union's records.

Usually they are small, non-profit financial organisations set up by members with something in common, such as living in the same town or working in the same industry.

Credit union members are offered the same protections under the FSCS as those of traditional banking institutions.