Register for Financial Planning Today website for FREE to view more stories and get our daily newsletters. Click on 2 stories to see Registration pop up.
Wednesday, 02 February 2022 08:55 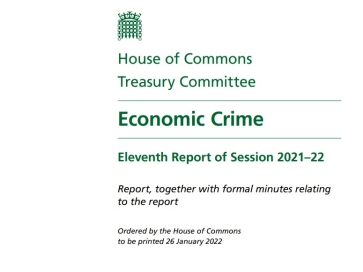 The Economic Crime report was released this morning

The Treasury Committee has urged the government to set up a new agency to combat the growing problem of financial fraud and scams in its new report on economic crime.

The report warns that law enforcement is insufficiently resourced to tackle the scale of financial scams.

It said that the current number of agencies responsible for fighting financial crime and fraud is “bewildering”.

Committee MPs said that a single law enforcement agency with a “clear responsibility” to fight financial scams would be more effective.

The report also calls for legislation for online firms to reimburse those who fall victim to financial scams due to fraudulent adverts published on their platforms.

The report followed one from 2019, with the Committee saying there has not be enough progress made in the fight against financial crime since.

The Committee also noted that the Minister for Security and Borders at the Home Office told the cross-party group of MPs that he was also “not happy” with the progress that the government had made in tackling economic crime.

“Unfortunately, fraud has soared during the pandemic, and as MPs we’ve heard heart-breaking stories of individuals who have fallen victim to these criminals and lost large sums of money.

“While the Government have made some progress in this area, we’re today calling on them to push harder and act faster on the growing fraud epidemic.

“Some of our recommendations, such as legislating against online scam adverts, can be implemented quickly. Others, including crypto regulation and Companies House reform, will require a longer-term approach.

“Taken together, our proposals give the UK a fighting chance to get back on the front foot and stop these scammers in their tracks.”

The Committee also called for higher company formation fees and reform of Companies House to make it harder for scammers to hide their identities when setting up UK businesses.

It also shared concerns that crypto assets are bringing increased risks of financial crime and welcomed the announcement that the government will legislate to bring the advertising of crypto assets in line with that of other financial services and products.

It added that the government should ensure that there is proper consumer protection regulation across the whole crypto asset sector.

The full report can be read online on the Parliament website.