Register for Financial Planning Today website for FREE to view more stories and get our daily newsletters. Click on 2 stories to see Registration pop up.
Wednesday, 09 February 2022 17:03 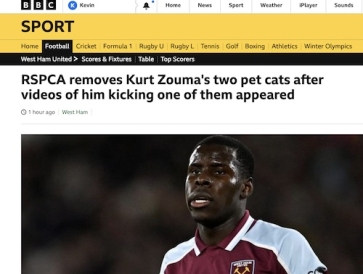 Financial provider Vitality has suspended its sponsorship of West Ham football club over its handling of the Kurt Zouma cat cruelty incident.

The West Ham Premiership player caused outrage after being pictured in an online video kicking and slapping a Bengal cat in his kitchen.

In a statement this afternoon Vitality said it was halting its sponsorship of the East London club with immediate effect.

Vitality said: “We were very distressed by the video we have seen of Kurt Zouma. At Vitality, we condemn animal cruelty and violence of any kind.

“We are hugely disappointed by the judgement subsequently shown by the club in response to the incident.

"As such we are suspending our sponsorship of West Ham United with immediate effect. We will now be further engaging with the club to understand what actions they will be taking to address the situation.”

West Ham has apologised over the affair but still decided to play Mr Zouma in a match last night where the French international was booed by both sides. The club has now fined him two weeks salary, estimated to be about £250,000. The fine is likely to be donated to pet charities.

The RSPCA has taken his pet cats away and is liaising with Essex Police.

Mr Zouma has apologised for the incident.

More in this category: « Aegon retail platform outflows fall Pru CEO to step down as group focuses on Asia  »
back to top