Register for Financial Planning Today website for FREE to view more stories and get our daily newsletters. Click on 2 stories to see Registration pop up.
Monday, 14 February 2022 06:31 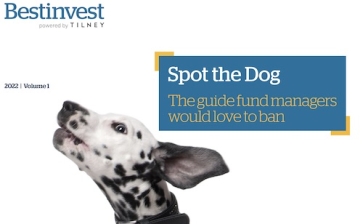 Bestinvest has named and shamed 86 poorly performing dog funds in its latest half yearly ‘Spot The Dog’ investment report.

Billed as the report ‘the fund managers don’t want you to read’, the number of dog funds is up from 77 last time.

While the number of dog funds has risen modestly the amount of assets held in the ‘paw’ performers is up by 54%.

Based on current size and ongoing fees, the latest dog list would generate annual fees of £463m for managers in a flat market, says Bestinvest.

Many of the 12 dog funds managing over £1bn in assets are in the Global and Global Equity Income sectors, with equity income funds “widely barking up the wrong tree.”

For example, JP Morgan’s US Equity Income fund controls £3.92bn of investors’ money and underperformed its North America index by -32%

The Biggest Beasts in Spot the Dog by Fund Size 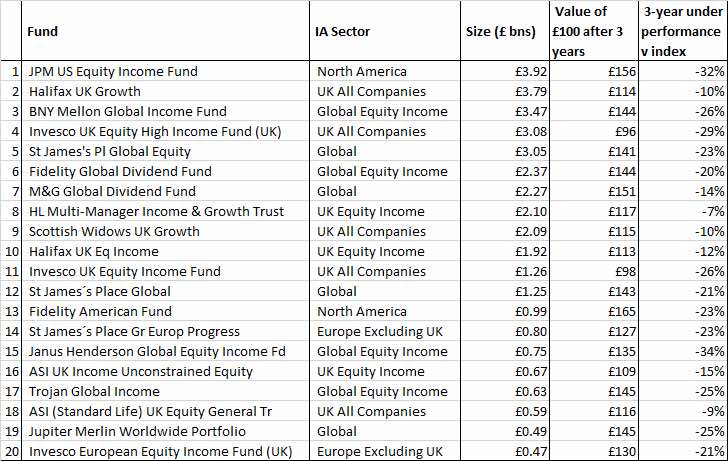 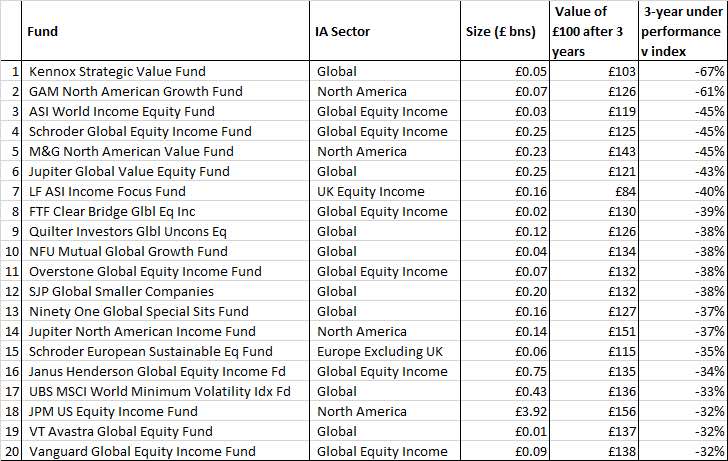 Jason Hollands, managing director of Bestinvest, says one reason why large global funds have done badly is because the US has come to dominate the indices by which many funds are measured.

The US is a low-yielding market (current yield is 1.27%) and has been led in recent years by growth stocks, many of which have never paid a dividend. Because of this it has been "near impossible" for Global Income funds to beat the main global indices as they tend to be underweight in both the US and growth stocks in particular, Mr Holland said.

There were no North America, European or Japanese smaller companies vehicles qualifying as dog funds.

Some of the worst-performing dogs are very small funds that are held by few retail investors, says BestInvest.

The biggest UK dog funds are Halifax UK Growth (£3.79 billion, -10%) and Invesco UK Equity High Income (£3.08 billion, -29%), which though absent from the previous report is no stranger to Bestinvest’s “kennel of shame,” the company said. The fifth giant is the biggest Global equity dog: St James’s Place Global Equity with £3.05 billion in assets. It did return 41% to investors but that was 23% worse than the index. The only other fund apart from JPM US Equity Income to appear in the 20 worst performers list as well as the 20 biggest dogs is Janus Henderson Global Equity Income (£750 million, and -34%).

In terms of companies with the most funds on the list, that is shared between St James’s Place, abrdn and Jupiter with six funds apiece. However, Jupiter’s six funds only total £988.6 million, while abrdn’s are £1.84 billion. This compares to £5.74 billion for St James’s Place.  Schroders has five funds under its own name, housing £1.02 billion in assets, and it also manages a number of funds for HBOS and Scottish Widows, which together add another £8.6 billion.

Jason Hollands, managing director of Bestinvest, said: “'Unsurprisingly, Spot (the Dog) doesn’t win any popularity awards with fund managers, particularly those with the funds in the list who will soon be howling out their excuses.

“But it has helped shine a spotlight on the problem of the consistently disappointing returns delivered by many investment funds. In doing so, not only has it encouraged hundreds of thousands of investors to keep a closer eye on their investments, but it has also pushed fund groups to address poor performance.”

The dog fund list covers only open-ended funds (unit trusts or OEICs), and only those available to UK retail investors. To make the list a fund must have failed to beat its benchmark over three consecutive 12-month periods. The fund must also have underperformed the benchmark by 5% or more over the entire three-year period of analysis.

• The ‘Spot The Dog’ report is available here: https://www.bestinvest.co.uk/research/spot-the-dog