Register for Financial Planning Today website for FREE to view more stories and get our daily newsletters. Click on 2 stories to see Registration pop up.
Tuesday, 15 February 2022 08:36 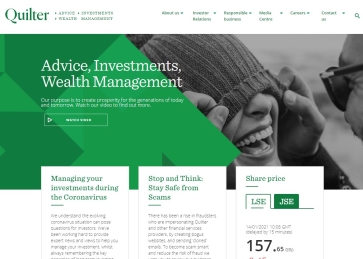 A former employee of Quilter Financial Planning has been awarded £1,649.29 by Leeds Employment Tribunal for ‘injury to feelings’ as the firm failed to make reasonable adjustments for his disability.

The award from the court arose as a result of claims he had made against Quilter over disability discrimination.

The calculation for the interest started on 4 November 2020 when Mr Newton first raised his grievance on a formal basis.

He had been employed as a business assurance assessor. His role involved reviewing advice provided by third party firms’ advisers to clients, including other firms within the Quilter group.

Mr Newton had joined the firm on 8 January 2018. He left Quilter after going on sick leave in January 2021.

He had made complaints against the Financial Planning firm over unfair dismissal.

The two conditions the claimant suffers from are scarring and chronic insomnia as a result of a brain injury suffered in a car accident in 2017. Both are considered disabilities for the purposes of s6 of the Equality Act.

The case was heard before employment Judge Deeley, Ms Hodgkinson and Mr Horwarth at Leeds Employment Tribunal on 1 February 2022.