Register for Financial Planning Today website for FREE to view more stories and get our daily newsletters. Click on 2 stories to see Registration pop up.
Friday, 18 February 2022 09:35 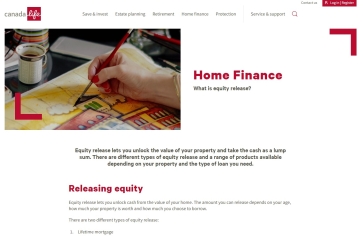 Just under a third (30%) of over-55s with a defined contribution pension plan to release equity from their home to help fund retirement plans.

Those on higher incomes were more likely to include equity release in their retirement planning.

Larger number of UK equity release customers are using the funds to support the cost of day-to-day living, according to a separate report from Canada Life earlier this month.

Almost a fifth (19%) of customers used equity release for this purpose in 2021.

It is the first time it has entered the top three reasons for releasing equity, according to the report.

Opinium surveyed 506 UK adults over the age of 55 with a defined contribution pension, who are not yet taking an income, on behalf of Canada Life between 15 and 26 October 2021.

More in this category: « Liontrust’s Roberts to retire after 34yr fund career Kingswood completes £1.5m takeover of Yorkshire adviser »
back to top