Register for Financial Planning Today website for FREE to view more stories and get our daily newsletters. Click on 2 stories to see Registration pop up.
Friday, 22 April 2022 08:37 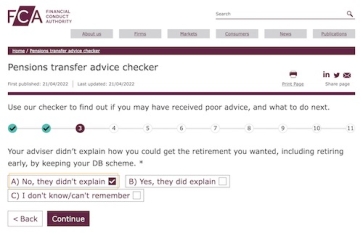 The FCA has relaunched its pension transfer ‘advice checker’ tool for consumers to help them assess whether they have received unsuitable advice.

The revamp of the tool, first launched in 2020, provides a new format to make it easier for consumers to use.

The relaunch comes as the FCA focuses on over 1,400 BSPS victims, some yet to receive compensation and with signs a number have yet to come forward.

The regulator has already taken action against a number of firms which advised British Steel Pension Scheme members on pension transfers, including barring one BSPS adviser firm this week from disposing of assets.

In March, the FCA launched a consultation on a £71.2m redress scheme for former members of BSPS. It said more than 340 advice firms may have been involved in giving potentially unsuitable advice to BSPS members. The FCA estimates up to 46% of BSPS advice may have been unsuitable.

The tool can be accessed here: FCA Advice Checker Tool

The 11-stage tool asks consumers about the questions their adviser asked before recommending a pension transfer.

Depending on the answers, the tool suggests routes for remedy if there is evidence of potential poor or unsuitable advice. Many of the questions cover the depth of adviser fact-finding.

The FCA and TPR say it is in most people’s interests to keep their DB pension scheme and not transfer.

The FCA said its assessment of pension transfers between 2015 and 2019 found that some advisers may have given unsuitable advice to transfer out of a DB pension scheme (also known as a 'final salary' pension) into a defined contribution (DC) pension scheme.

Consumers can use the advice checker if they transferred out of a DB pension scheme after April 2015, and an FCA regulated firm advised them to transfer.

The FCA points that if DB pension scheme members received unsuitable advice they need to complain formally to be considered for compensation.

Insistent clients are warned that if they were determined to transfer, no matter what the advice from their adviser, they are less likely to have a valid complaint.

The FCA says a Claims Management Company or solicitor is not necessary to make a complaint.