Register for Financial Planning Today website for FREE to view more stories and get our daily newsletters. Click on 2 stories to see Registration pop up.
Tuesday, 05 July 2022 08:54 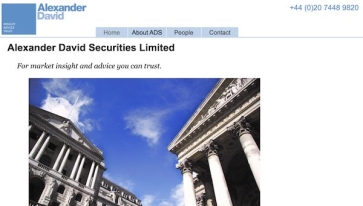 A City-based securities company linked to a wealth manager and three other appointed reps has gone into liquidation after FCA intervention, opening up possibility of at least £1.3m of claims to the Financial Services Compensation Scheme.

The FCA said it had identified “serious concerns” at ADSL around compliance with the FCA’s rules and the Money Laundering Regulations.

In the first FCA Supervisory Notice the regulator said that ADSL’s conduct, “appears to demonstrate that it poses a significant risk of harm to consumers.”

There are 32 open Financial Ombudsman Service claims agains the company totalling over £1.3m.

In its Supervisory Notice the FCA said that the Ombudsman Service notified the regulator that between June 2017 and December 2020, there were a total of 39 outstanding complaints lodged against ADSL. The firm did not appear to have enough cash to meet the claims.

Many of the complaints relate to allegations that one of ADSL’s approved representatives provided “unsuitable investment advice” to customers to move funds in their SIPP into debentures issued by a company with shares quoted on the Cyprus and Vienna Stock Exchanges.

The FSCS has now categorised the firm as failed and is also investigating. It says the firm was involved in pensions and investments.

ADSL was linked to a number of firms which were appointed representatives of ADSL.

The FCA said that ADSL was an FCA regulated firm which was authorised to conduct investment related activities. It provided corporate finance advisory services including initial public offerings, secondary fund raisings, mergers and acquisitions and debt offerings. It also undertook some other unregulated activities.

The firms (with dates for their appointed rep status) are:

ADSL also had permission to hold and control client money until 29 June 2020 when the firm agreed voluntarily to an FCA intervention requiring it to stop holding client money.

On 29 April 2022 the FCA imposed a number of restrictions on ADSL and this was followed on 1 July by the firm going into voluntary liquidation.