Register for Financial Planning Today website for FREE to view more stories and get our daily newsletters. Click on 2 stories to see Registration pop up.
Tuesday, 12 July 2022 09:28 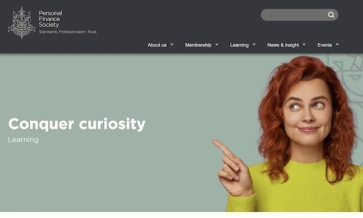 The Personal Finance Society, the professional body for Chartered Financial Planners, has begun the process of recruiting an interim CEO.

It is anticipated that the interim CEO will be in place by the end of this summer.

The temporary new role will focus on supporting members’ interests during 2022, ahead of the recruitment of a full-time CEO in 2023.

The PFS CEO role, held by Keith Richards, was axed last year by parent body the Chartered Insurance Institute (CII) but was reinstated in February this year in a U-turn.

Many PFS members were angered about the axing of the role.

Sarah Lord, President of the PFS, said: “The role of PFS CEO was dissolved by the former CEO of the Chartered Insurance Institute (CII) in June 2021. Over the last year the PFS has worked with the CII to establish the most effective way to manage the organisation. It has become clear that the best way to represent and advocate the PFS members’ interests and preserve and protect its assets and deliver tailored member support is through the appointment of a full-time executive CEO role.

“Our members provided feedback supporting the need for a dedicated executive championing their interests within the CII’s ‘Shaping the future together consultation’ last year. The CII executive is supportive too. This is why we are commencing an executive search process immediately and will appoint an interim CEO in the first instance while we seek a permanent appointment.”

The PFS added that while the general insurance and personal finance sectors have evolved in differing directions, there remains merit in investigating future approaches together with the CII that will ultimately serve the needs of both organisations’ members while maintaining public confidence in the two disciplines.

The 40,000-member professional body for Financial Planners dropped the role of CEO following the departure in June last year of respected PFS CEO Keith Richards. The CII said at the time that the role of PFS CEO would not be directly replaced but instead a chief membership office would lead the PFS combined with CII responsibilities.

The CII combined the CMO and PFS CEO role in 2016 with Mr Richards holding both positions in recent years.

The CII decided to do a U-turn after stiff opposition from members, particularly PFS members.

The PFS board is currently selecting a professional consultancy to search for candidates to fill the interim CEO role.

The interim CEO will later work with the incoming permanent CEO to ensure there is a smooth transition in leadership.

The PFS said its priorities for the remainder of this year included ensuring there is a, “dedicated champion that is able to deliver a laser-like focus on members’ best interests, promoting the PFS’s strategic business plan, its November Festival of Financial Planning, and supporting the volunteer board to ensure the PFS continues to meet its purpose and provide members with “valuable Chartered status”.

According to the results of the CII / PFS ‘Shaping The Future Together’ membership consultation undertaken last year, members wanted the two organisations to stay together, rather than the PFS split off as some campaigners had urged. However, members did call for improvements, particularly on qualifications.

CII chair Helen Phillips said the professional body would use the findings of the consultation in the coming months to develop a five year strategy for the body. Some 1,149 members took part in the consultation, although this was only a fraction of the combined bodies’ 125,000+ membership.

According to key findings from the consultation, members want a number of changes including streamlined qualifications, the introduction of behavioural content and a focus on raising public trust in the profession through the promotion of professional standards and increasing confidence that member misconduct will be addressed.

The CII replaced its CEO in April. https://www.financialplanningtoday.co.uk/news/item/14488-chartered-insurance-institute-hires-new-ceo

Alan Vallance, currently CEO of the Royal Institute of British Architects (RIBA), will succeed Jonathan Clark, CII interim CEO, on 30 August. He becomes CII CEO after the shock resignation last October of Sian Fisher, the under fire CEO of the Chartered Insurance Institute, who stepped down after six years in the role.

Mr Clark said: “I am, and always have been, deeply committed to working collaboratively with the PFS, to best serve insurance and financial planning professionals. I have been very clear I believe the PFS needs a strong leader and I look forward to working closely with them as soon as they are in place.

“We must continue our collective engagement, so we have a united understanding of the challenges both professions face. Then we can deal with those challenges in a simple clear way; a way that – without compromise – always has our membership at heart.

"The PFS is an absolutely critical part of what we do – its 39,000-strong membership is highly valued and is a great voice for advice, especially at a time when the cost-of-living crisis is impacting even the most resilient among us.”