Register for Financial Planning Today website for FREE to view more stories and get our daily newsletters. Click on 2 stories to see Registration pop up.
Tuesday, 12 July 2022 11:06 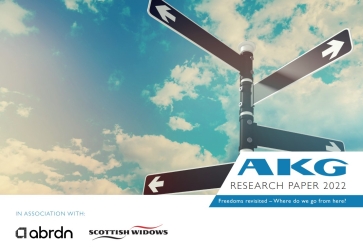 The cost-of-living crisis and return of inflation is putting the evolution in consumer attitudes towards saving for retirement at risk, according to both financial advisers and clients.

The crisis is putting the gains from Pension Freedoms at risk, according to a new report from AKG.

Financial advisers questioned for the report said they were starting to see a genuine evolution in consumer attitudes with changes to how people prepare and save for retirement.

The three top areas of concern for the consumers surveyed was running out of money (42%), the impact of inflation and cost of living (40%) and care costs in older age (31%).

When it came to who they would trust to give them advice on planning for retirement, consumers said they would trust Financial Planners the most (31%), followed by the Citizens Advice Bureau (23%), the Money and Pensions Service (23%) and Pension Wise/Money Helper (20%).

Almost one in five (18%) said they would seek advice from their existing pension product provider.

A third of the consumers surveyed (30%) said they would like to see advice and/or guidance offered by the pension provider.

Matt Ward, communications director at AKG, said: “Concerns around inflation and cost of living crisis are a very real threat and issue for people across the country and will have a direct impact on the considerations of pensions customers across age groups and whether in accumulation or decumulation pension phases.

“We have had such a prolonged period of low inflation that a lack of inflation may be almost baked into people’s assumptions and their positions/plans could be heavily destabilised.

“The industry therefore needs to be both helpful, practical and realistic in the way in which it seeks to educate and address these issues with a wide range of pensions customers.”

When it came to what advisers wanted to see from pension providers, their top priorities were competitive charges which provide value for money (79%), service deliver standards (65%), digital/online capability and functionality (57%), a range of product and fund solutions (55%), and financial strength/sustainability (51%).

AKG conducted three separate but complementary market research exercises, sponsored by Abrdn and Scottish Widows, with both consumers and advisers including a qualitative study with senior executives at advice/planning and employee benefit firms.

More in this category: « Only 1 in 10 clients dedicated to ESG investing Two in five cut back on saving »
back to top