Register for Financial Planning Today website for FREE to view more stories and get our daily newsletters. Click on 2 stories to see Registration pop up.
Tuesday, 19 July 2022 09:14 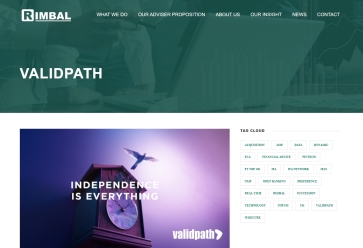 Industry veteran Barry Meeks has joined the board of IFA network ValidPath as an independent non-executive director of parent firm Rimbal.

He will support group governance, regulatory compliance, the ValidPath succession solution and serve on the risk committee.

Mr Meeks recently resigned from the board of fellow IFA network Tenet where he was a non-executive director since 2013 and chair of the risk committee and a member of the audit committee.

He is a veteran of the UK mortgage, banking, IFA network and wider financial services sector, with over 30 years in the market under his belt.

Angus MacNee, CEO of Rimbal ValidPath, said: “As we expand our proposition and succession solution for independent financial advisers, Barry brings a wealth of experience to the board and group that will be invaluable.

“It is rare to find someone like Barry that has the background in IFA networks and the broader experience and expertise in financial services generally.  Barry is an industry veteran that has led a number of successful UK financial services businesses as an operator and also functioned as a senior independent director of major financial institutions.

“Barry joining the Rimbal board is further endorsement of our proposition for independent financial advisers and recently launched ValidPath succession solution, he is aligned with our vision and I welcome him to the team.”

Mr Meeks is a Chartered Director and Fellow of the Institute of Directors and is classified as an Approved Person by both the PRA and FCA.

IFA network ValidPath is part of Rimbal, a financial services and technology group.

More in this category: « Defaqto to launch more reg-focused services 4 in 10 enter decumulation without advice »
back to top