Bank of England favours no increase to QE programme 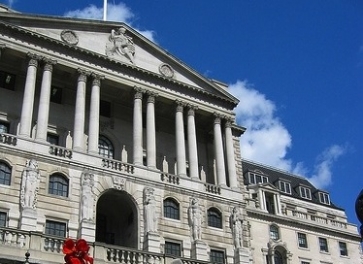 Bank of England
This month's minutes from the Monetary Policy Committee meeting on 5-6 December show that member David Miles remained the sole member to support an increase to the asset purchase programme.

In the decision whether to maintain the size of the programme at £375bn, Mr Miles was the only member to oppose the decision and instead favour an addition of a further £25bn. He was also the only member to choose this approach at November's meeting. If £25bn was added, this would bring the total to £400bn.
However, for the remaining eight members, they felt the outlook for growth had weakened and that inflation was likely to remain above two per cent for the next year.
{desktop}{/desktop}{mobile}{/mobile}
It said: "On balance, the near-term outlook for growth seemed a little weaker. Although inflation had risen again and seemed unlikely to fall very substantially below the two per cent target in the medium term, the degree of slack in the economy and the likely response of supply capacity to increased demand, meant it would be possible to achieve higher output growth without causing any material inflationary pressure. That would help avoid potentially lasting destruction of productive capacity and increases in unemployment."
The committee said growth remained "subdued" and that it was "too soon" to assess the effectiveness of the Funding for Lending scheme, although early signs had been encouraging.
The next meeting will be held on 9-10 January 2013.

More in this category: « UBS fined £940m by international regulators for Libor manipulation Towry raises £35m of equity for expansion plans »
back to top