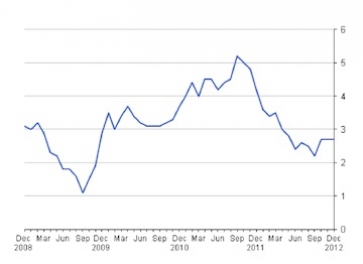 Inflation graph over past 12 months. Source: ONS
Consumer prices index (CPI) inflation was 2.7 per cent in December, unchanged for the third consecutive month.

The Office for National Statistics said the biggest upward pressure came from gas and electricity bills while the biggest downward rate came from air travel.
Housing and household services prices, which includes gas and electricity, rose by 2.0 per cent compared to a 0.2 per cent in 2011. Transport rose by 0.7 per cent, compared to a rise of 2.2 per cent in 2011, with air fare prices rising by half as much as a year ago.
Smaller upward pressures came from clothing and footwear where prices fell by 1.5 per cent compared with fall of 2.8 per cent a year ago.
{desktop}{/desktop}{mobile}{/mobile}
The ONS said the monthly differences were not enough to change the 12-month rate.
The retail prices index, which includes mortgage rates, was 3.1 per cent, up from 3.0 per cent in November. Utility bills were the largest contributor to the RPI rise.
The ONS announced last week that the formula for RPI did not meet international standards and that, from March, a third index called RPIJ would be used.
There will also be an additional measure of measuring CPI inflation which will include owner occupiers' housing costs, known as CPIH. This will measure the costs of living in, owning and maintaining a property.
The next inflation figures will be published on 12 February.

More in this category: « UK and US regulators begin investigation into JP Morgan Chase Bank M&G to merge its UK Select and UK Growth funds »
back to top