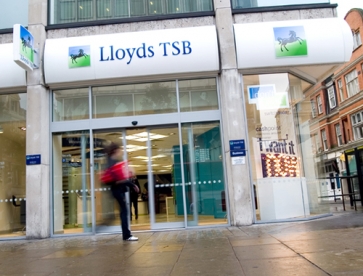 Lloyds TSB branch
Lloyds TSB Bank has topped a list of complaints by receiving 45,727 new cases in the second half of 2012, according to the Financial Ombudsman Service.

The data released today shows the total number of new cases received by the Ombudsman in 2012.
Lloyds, which was in second place for the first half of 2012 with 12,235 cases, has replaced Barclays at the top of the table.
Over 42,000 of the Lloyds complaints related to the mis-selling of payment protection insurance while 2,740 related to banking and credit.
{desktop}{/desktop}{mobile}{/mobile}
Some 55 per cent of the cases at Lloyds were resolved in favour of the consumer, including 88 per cent of PPI cases. The average percentage of cases resolved in favour of the consumer was 45 per cent while the average number of PPI cases resolved in favour of the consumer was 60 per cent.
Lloyds Banking Group as a whole, including its subsidiaries such as Cheltenham & Gloucester and Scottish Widows, received over 93,000 complaints. Some 83,742 of these were PPI complaints.
In second place, Barclays was the subject of 44,725 new cases while Bank of Scotland, which is also part of Lloyds Banking Group, received 39,375 new cases.
In total, the Ombudsman received 283,251 complaints during the second half of 2012, double the amount received in the first half of the year.
The Ombudsman said it expected to receive 285,000 complaints in the 2012/13 financial year, with 50 per cent being PPI complaints.

More in this category: « FSA publishes ideas for improving transparency and disclosure Fixed income and Isas saw net outflows in January says IMA »
back to top