Register for Financial Planning Today website for FREE to view more stories and get our daily newsletters. Click on 2 stories to see Registration pop up.
Tuesday, 26 March 2013 10:54 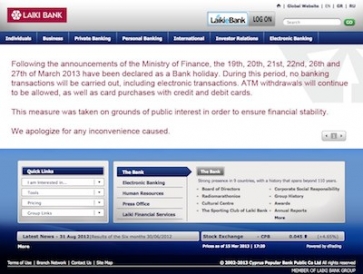 One of the Cyprus banks hit by the crisis
Increasing numbers of British expats in Spain, Italy, Portugal and Greece are seeking advice on transferring their funds outside their adopted countries, says the boss of an expat wealth management firm.
DeVere Group says that there are concerns that the Cyprus deposit raid might not be the "one-off" measure it was claimed to be at the outset.
Nigel Green of the deVere Group, expat wealth management specialists, says more people are seeking advice after Dutch MP and President of the Eurogroup, Jeroen Dijsselbloem let slip that the deal in Cyprus – in which depositors who have more than 100,000 euros could lose up to 40 per cent of their bank deposits to fund the bailout - could serve as a "template" for future bailouts in the rest of Europe.
Despite an official issuing a corrective statement within three hours of Mr Dijsselbloem's comments, asserting that "no models or templates are used," markets plummeted in response.
Mr Green says: "Template or no template, the damage has already been done as the slip of the tongue effectively confirmed what people have been thinking since the idea to raid depositors' savings in Cyprus was first mooted last week – that if this controversial plan goes ahead it will be extrapolated to prop-up other vulnerable banking sectors in Europe.
"Similarly, with officials even publicly suggesting - as they did to much outrage originally - that deposits of under 100,000 euros, which are supposed to be protected by the state under EU law, could be hit, it carries the implication that such a move is very much on the table.
{desktop}{/desktop}{mobile}{/mobile}
"As a direct consequence, more and more expats in Spain, Italy, Portugal and Greece are now not unreasonably worried for their deposits in these countries. Over the last week, since the messy deal to bailout Cypriot banks began, our financial advisers in these areas have reported a significant surge in enquiries from expats who are looking to safeguard their funds in other jurisdictions which are perceived to be safer.
"Whether the institutions like it and accept it or not, there is a real risk of a major deposit flight from these countries as people feel their accounts could be plundered next. We are, clearly, living in exceptional, unprecedented and uncertain times in the eurozone and a growing number of expats are, perhaps unsurprisingly, seeking advice on mitigating the effects of the Cyprus deal potentially being used as a template for action elsewhere."
There are an estimated 800,000 Britons living in Spain and Portugal.
Tweet
This page is available to subscribers. Click here to sign in or get access.
Published in Articles
Tagged under

More in this category: « L&G completes takeover of Cofunds but keeps separate brand 'Forgotten' marketing is costing SME sector £122bn in sales »
back to top