Register for Financial Planning Today website for FREE to view more stories and get our daily newsletters. Click on 2 stories to see Registration pop up.
Thursday, 10 October 2013 10:16

Global CFP body for 150,000 planners to meet in Sydney 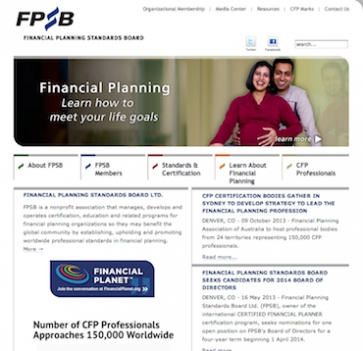 In the UK the IFP is the membership body for CFP professionals and its sister organisation, FPSB UK, runs the CFP certification programme. IFP chief executive Steve Gazzard CFPCM is due to attend the meeting along with former IFP President Barry Horner CFPCM. Mr Horner is currently chair of the FPSB Council, an advisory body of the FPSB board of directors, and will becomes FPSB board chairman in 2015.
The FPA will host the meeting of the Financial Planning Standards Board (FPSB), owner of the international Certified Financial Planner certification and its member organisation, in Sydney from 23-25 October. The IFP hosted the FPSB meeting last year in Wales.
The FPA, the first organisation to administer CFP certification outside of the US beginning in 1990, will host a two-day session that will focus on strategies to lead the Financial Planning profession worlwide.
Mark Rantall CFP, chief executive of the FPA, said: "As the organisation with the fifth largest population of CFP professionals in the world, the FPA is pleased to welcome FPSB and its member organisations to Australia."
{desktop}{/desktop}{mobile}{/mobile}
"The meeting comes at a significant time for Financial Planning in Australia, as the FPA works toward enshrinement of the term "Financial Planner" in law. Many of FPSB's members are also experiencing shifting macro-economic and regulatory environments, so we will have much to discuss as we look to grow the base of CFP professionals globally."
Peter Kell, deputy chair of the Australia Securities and Investments Commission (ASIC), is scheduled to address the group at a dinner on Wednesday, 23 October.
The FPSB, which became an affiliate member of the International Organization of Securities Commissions (IOSCO) last year, will also discuss in Sydney how FPSB and FPSB members can partner with regulators on oversight of the Financial Planning profession.
Representatives from FPSB's board of directors and FPSB members will also attend the FPA Professionals Congress, which takes place in Sydney from 17-18 October.
"We are excited to bring FPSB's international meeting to Sydney, where FPA continues to play a leading role in the global Financial Planning profession," said FPSB CEO Noel Maye. "I want to thank Mark Rantall and FPSB Chairperson Steve Helmich, director of advice and client solutions at AMP, for their commitment to FPSB's mission and for working so diligently with CFP professionals, firms and regulators to help put consumers in Australia in control of their lives through the use of personal Financial Planning."
The FPSB establishes, upholds and promotes worldwide professional standards in Financial Planning and partners with organisations like FPA and the IFP and FPSB UK to offer CFP certification.
The FPSB is a non-profit member organisation in the following 25 territories: Australia, Austria, Brazil, Canada, Chinese Taipei, Colombia, France, Germany, Hong Kong, India, Indonesia, Ireland, Israel, Japan, Malaysia, New Zealand, the Netherlands, the People's Republic of China, the Republic of Korea, Singapore, South Africa, Switzerland, Thailand, the United Kingdom and the United States. In 2013, there are more than 150,000 CFP professionals worldwide.
Last modified on Friday, 11 October 2013 13:25
Tweet
This page is available to subscribers. Click here to sign in or get access.
Published in Articles
Tagged under

More in this category: « Pershing joins move to electronic re-registration for UK Clients £92bn is stashed away in 'secret savings' »
back to top