Register for Financial Planning Today website for FREE to view more stories and get our daily newsletters. Click on 2 stories to see Registration pop up.
Tuesday, 05 November 2013 07:55 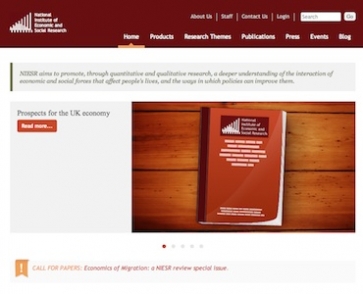 NIESR website
A new thinktank forcast suggests the UK economy will grow by 1.4% this year, accelerating to 2% next year, supporting the view that the UK is back on a growth path.

The National Institute Economic Review (NIESR) says that unemployment will fall gradually to about 7.4 per cent by the middle of next year. This could put pressure not the Bank of England to consider increasing the base rate. NIESR says it is already factoring in a base rate rise by the second half of 2015.
The NIESR forecast for the world economy predicts that the world economy will grow by 3 per cent this year, and by 3.8 per cent in 2014.
For the UK, NIESR predicts that consumer price inflation will also fall gradually to an average of 2.5 per cent per annum next year and says there will be a slight decline in underlying public sector borrowing this fiscal year, to about 7 per cent of GDP, and about 6 per cent in the following year.
After two years of stagnation, economic growth has returned, according to NIESR (see table below), underpinned by an increase in consumer spending. Growth will continue, albeit at a slightly slower rate than in the first half of this year.
An NIESR spokesman said: "We expect GDP to return to its previous peak in early 2015, although per capita GDP will still remain well below the 2008 peak. This central forecast implies only a gradual elimination of the large negative output gap.
{desktop}{/desktop}{mobile}{/mobile}
"The upward revisions to our forecasts have returned them to roughly where they were in August 2012. Both the deterioration in the forecasts in late 2012 and early 2013, and the improvements since, reflect changes in the outlook for consumer spending and developments in the Euro Area. Underpinning this is a judgement that increased activity in the housing market will spill over into real economic activity, in the form of additional consumer spending financed by a lower saving rate."
However the thinktank says that medium term prospects, especially on government borrowing, remain challenging. It says that consumer spending growth is necessary for an economic recovery in the UK but a consumer-driven recovery will not be 'balanced', let alone one reflecting the required long-term 'rebalancing' towards an economy with greater net national saving. By 2018 the UK is expected to continue to require foreign financing (a balance of payments deficit) equivalent to around 2 per cent of GDP.
NIESR expects that underlying public sector deficit (as a per cent of GDP) will fall slowly this year but this should accelerate in the following years. It forecasts that the current budget will be roughly balanced in 2017–18. The rolling forward of the five year horizon for the government's 'primary fiscal target' to 2018–19, means that the government should comfortably hit its primary fiscal target. The government's current plans are for public sector net investment to stabilise at 1.5 per cent of GDP.
The decision by the Bank of England's Monetary Policy Committee to use the unemployment rate as the intermediate threshold in its forward guidance has focused even more attention on this statistic. However, there is a considerable uncertainty about the rate at which unemployment will fall, says NIESR. While its central forecast is that unemployment will not drop below 7 per cent until 2016, it estimates a 20 per cent chance that it will fall below that level as early as the first quarter of 2014. Its forecast assumes a rise in interest rates in the second half of 2015.

More in this category: « Brooks Macdonald and Humberside IFA form alliance Planners urged to back IFP's Financial Planning Week 2013 »
back to top