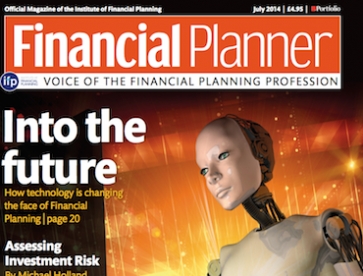 The front cover of the latest Financial Planner magazine which looks at business technology. It is out next week

The chief executive of the FCA wants to explore whether strides forward in artificial intelligence can help deliver more automated advice and contribute towards solving the 'advice gap'.

Advances in computer technology and artificial intelligence and their possible applications to the financial advice sector will be examined in an FCA study.
The regulator's chief executive Martin Wheatley wants to look at how new tech and automated advice can help those may not have the funds for a complete advice package.
Talking about the leaps forward in technology, Mr Wheatley cited what has been heralded a breakthrough in artificial intelligence this week as a computer program convinced 10 out of 30 judges it was a person in a series of online chats.
The supercomputer, imitating a Ukrainian teenager, won an artificial intelligence competition at the Royal Society in London. Event organisers claimed it had made history by passing the Turing test, said to be a significant step in artificial intelligence advancement, though some disputed this.
Mr Wheatley said "we're having our expectations raised" after reading about the remarkable computer program.
He said: "We may yet look back on June 2014 as a defining moment in financial service history, with The Royal Society yesterday revealing a computer had passed its iconic 'Turing Test' for the first time. In other words, a machine has become indistinguishable from a human.
{desktop}{/desktop}{mobile}{/mobile}
"An important question: what, if anything, does all this mean for dispensing investment advice in the years to come?
"And can it be automated to deliver returns and security for consumers with straightforward needs?
"Tackling the so-called 'advice gap' between those with large investments pots, who are willing to pay for financial support, and those with smaller investments, who might be more reluctant to put a value on advice."
He described automated advice as a 'priority'.
The FCA will be publishing a consultation paper examining these questions next month.
For more on the technology that Financial Planners are using to drive efficiency in their companies see the latest edition of Financial Planner magazine, which is out next week, for our special cover feature on business technology.