Register for Financial Planning Today website for FREE to view more stories and get our daily newsletters. Click on 2 stories to see Registration pop up.
Friday, 12 September 2014 10:20 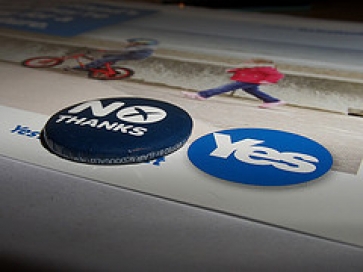 The two sides of the campaign are gearing up as the vote approaches. Picture courtesy of Kyoshi Masamune via Flickr

A pensions firm's co-founder has predicted chaos if Scots vote for independence and says everyone in the financial services industry is keeping their fingers crossed that it does not happen.

The campaign for independence insisted that Scotland can thrive economically on its own and said there had been a lot of scaremongering regarding pensions.

But a breakaway from the rest of the UK will lead to a "maelstrom" with the ripples felt across various sectors, but particularly in pensions, according to John Fox, chief executive of Liberty Sipp.

He said much of the detail of what would happen on key issues like pensions were still "very vague".
Speaking to Financial Planner Online, he said: "The big issue I can see is for unfunded benefits and schemes.
"From an admin point of view it's a potential nightmare. It's not just on the pensions side though, there's no joined up thinking at all on this.
"There are so many things that haven't been taken into consideration - tax relief – for example.
"It's not just taxation either, it's also just the basic details of people saying 'where is my money is being held?'

"'If my money is in RBS what currency is it being held in? We've had an enquiry on that this week."

The seemingly sudden swell of support for independence, which came apparent through an opinion poll last weekend, has caught everybody on the hop, Mr Fox said.
He said: "I don't think anyone expected it to be this close and now panic is setting in.
"Everyone in the industry is keeping their fingers crossed that they don't vote for independence.
"It will be a maelstrom and people won't understand what's going on. What chaos is going to ensue?"
He believes that perhaps the emotional and historical arguments are swaying voters as the vote on 18 September looms.
He said: "People are getting carried away with the Brave Heart idea."

"And so will public sector pensions – including civil service, armed forces, police, fire-fighters, NHS, universities, teachers and local government pensions. Some of these schemes are already administered by the Scottish Government.
"There will be agreement between the Scottish and UK governments as to the exact share of pension liabilities to be taken on by the Scottish Government – but it has repeatedly been made clear that no accrued pension rights will be lost.  Private pensions will continue to operate as before. The Scottish Government will ensure there are suitable protections in place for final salary occupational schemes."
The SNP has said: "The reality is that pensions are more affordable in Scotland than in the rest of the UK, a view supported by the National Institute of Economic and Social Research, who have also made clear that the demographic challenge is no more significant for Scotland than it is to the rest of the UK. "We also know that insurance providers, including HSBC and the Department of Work and Pensions itself, are clear that pensions would be unaffected following a Yes vote. "With independence we will be able to ensure a fair deal for pensioners, with a triple lock on the state pension to keep pace with the cost of living, a review of the pension age to ensure it is right for Scotland's pensioners and a fair approach to public sector pensions."
The referendum takes place on September 18.