Register for Financial Planning Today website for FREE to view more stories and get our daily newsletters. Click on 2 stories to see Registration pop up.
Wednesday, 17 September 2014 11:28 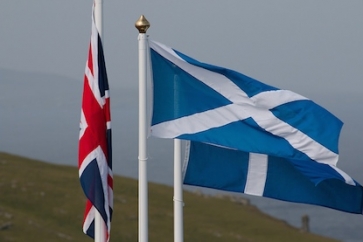 Scottish independence poses a "nightmare scenario" for the financial services industry despite the yes campaign's insistence it can be a strong economic power on its own, a former IFP president says.

Scots go to the ballot box tomorrow, with the campaign ratcheting up to fever pitch this week.
The two sides have clashed repeatedly over key financial and economic issues with claim and counter claim on a daily basis.
The currency, national debt and pensions, have been among the topics debated.
Ex-IFP President Campbell Edgar has Scottish roots, with his family having come from Ayreshire, where his great grandfather is understood to have been Robbie Burns's preacher, although he has lived outside Scotland for most of his life.
He said: "I am, I suppose, part of the Scottish diaspora who does not have a vote, in the same situation as many millions who claim a Scottish ancestry.
"As such, we can only opine. From a personal financial services perspective, it's a nightmare scenario, primarily because 90% of Scottish financial services firm's clients are not Scottish.
"So banks and insurers will have to move south - Lloyds to London, Standard Life to Newcastle? What's the currency? Roubles? Petro-dollars?
"North Sea oil and gas will cost too much to extract (relatively) as fracking comes on-line, so where's the national income and potential balance of payments/trading income?

"Without financial services and profitable oil revenue, independent Scotland cannot survive for long."
He believes there are many problems with other aspects of separation.
Whatever the outcome though, he said in terms of his profession, the "internationally recognised Certified Financial Planner will continue to thrive, be she or he Scottish, English, Welsh, Northern Irish or even British".
The campaign for independence insisted that there has been a lot of scaremongering regarding pensions and financial issues. It has cited a Financial Times report which suggested Scotland can be a success on its own.
Blair Jenkins, chief executive of Yes Scotland, said: 'What the Financial Times has produced is a well-researched and robust analysis which clearly shows that Scotland has got what it takes to be a successful independent nation.
"Much of what the FT says echoes what we have been saying throughout this campaign - that we have all the ingredients we need to do this.
"A Yes vote is simple common sense. It will put Scotland's future in Scotland's hands. It will be good for Scotland and it will be good for the rest of the UK."
First Minister Alex Salmond has said: "Our economic strengths - our ingenuity, our natural resources and our advantages across a range of growth sectors mean that we should be confident about our economic prospects as an independent country."

More in this category: « Platforum confirms resignation of founder Holly Mackay Extra VAT costs for finance firms to run into £100millions »
back to top