Paraplanners to assemble for latest Powwow in London 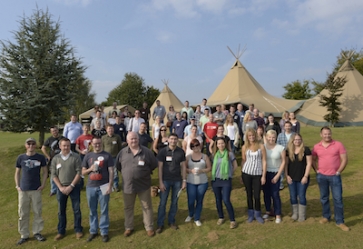 The group who attended the national Powwow

Paraplanners will come in from the cold today (Thursday 13 Nov), leaving their teepees to one side for a more conventional venue as they meet for the latest in a series of increasingly popular conferences.

The second Paraplanner Powwow Down South will take place at Transact's offices in London, following the outdoor, countryside-based national Powwow in September.
About 30 Paraplanners are expected to attend and to take part in the round table discussions and networking.

The group will talk about the practicalities of day to day Paraplanning life, share ideas and promote best practice.
One of the hot topics among Paraplanners to emerge from debates from the national Powwow in Northamptonshire two months ago was the creation of a unified standard for the profession, including a minimum level of qualification.
Some Paraplanners also suggested creating their own distinct professional body.

There will be a variety of topics up for discussion. The first session will focus on pension and investment switching, including how this is covered in reports, how people assess critical yields, what tools people use, bulk asset migration and more.

Session two will look at the length of reports, such the detail to include, what to put in appendices, how to deal with Financial Planning reports, cashflow and life planning.
Following the two main sessions, there will be a closing 'question and discussion' session, where Paraplanners can raise topics including top tech tips, and how to keep up with regulatory changes, CPD or anything else they want to raise.
For those who want to stay, the final hour will include a lunch and networking session.

The event has been organised by the same duo behind the first London event in January - Alan Gow, co-owner of Argonaut Paraplanning, and John Redmond of BPH Wealth Management. Nathan Fryer from Plan Works has also been involved this time.

Mr Gow told Financial Planner Online that the Powwow movement to advance the profession in the UK was gathering momentum.

After announcing the latest London event last month, he said: "There's a real momentum gathering, it's growing rapidly. I think there's a real buzz in the profession at the moment partly because of the national Powwow and also because Paraplanners are getting a lot more press and advisers are increasingly realising the value of Paraplanner.
For more details and tickets click HERE.