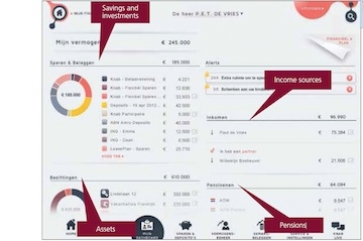 A 'pensions dashboard' should be created to enable consumers to view all their lifetime pension savings, including their state pension, in one place, the FCA has said.

Officials who carried out a report into the retirement market, published today, found it was failing consumers, and have recommended the move as part of a drive to provide retirees with better information.
The summary of pension details would set out an individual's entitlements including all of their accumulated DC pension savings. It could be developed over time to allow consumers to view all of their other sources of retirement in one place. It would be possible to access by UK consumers at any time through a personal log-in.
Similar systems used in other European nations have shown it can be effective, the FCA said.
The authors of the report said: "A pensions dashboard would allow consumers with several pension pots to have a clear understanding of their accumulated pension wealth. This is likely to benefit increasing numbers of people in the future with the introduction of automatic enrolment.
"Consumers with a better understanding of their accumulated pension wealth should make better informed decisions when taking their benefits.
"Qualitative evidence indicates that the pensions dashboard in the Netherlands, which allows individuals to log in to view their total pension and non-pension assets, has encouraged consumer engagement with pensions by making them more tangible and visible to retirees."
Some indication of the success of the dashboard in the Netherlands has been provided by self-reported measures of financial awareness, the report stated.
Officials said they acknowledge the challenges and cost for a project and the fact that it has been raised before.
{desktop}{/desktop}{mobile}{/mobile}
The report stated: "We believe that the case for introducing it in the UK is getting stronger. As people increasingly have multiple pension pots and other sources of retirement income, there is a greater need for this tool."
Mark Stopard, head of product development at IFP corporate member Partnership, said: "As a founder member of PICA, we are particularly pleased that the pensions dashboard – a concept that the organisation has championed – has been included.
"Allowing people to view all their pension information together will not only ensure that they can make informed decisions but will also encourage them to take a considered look at all their options at retirement.
"Perhaps – most importantly – it will also facilitate shopping around to ensure that they make the most of their retirement savings. Too often people simply take what is offered by their existing provider as they perceive it to be easier and not overly detrimental to their finances. Today's announcement will encourage people to engage and achieve the retirement income they deserve by making their pension savings more tangible and visible."

Get FREE daily news summaries direct to your inbox. Sign up on the homepage now.
Follow us on Twitter  and get frequent news alerts @FPM_online.
Or follow Editor Kevin O'Donnell - @FPM_Kevin or staff writer James Nadal - @FPM_James.
For the latest Sipp, SSAS and retirement news visit our sister news site www.sippsprofessional.co.uk and on Twitter @SippsPro.

More in this category: « Retirement market failing consumers, regulator concludes IFP Scottish conference hailed as "by far the best yet" »
back to top