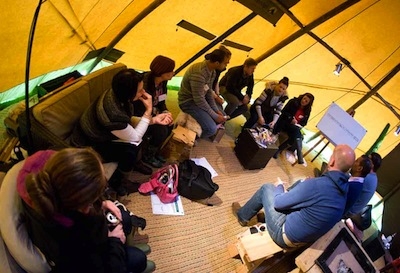 A previous Powwow in teepees

The first ever Paraplanners Powwow in Scotland will take place next as part of a double whammy of 'unconferences'.

The latest branch-off from the original event is the Powwow North of the Border, organised by Colin Stewart and Susan Pringle, to be held in Edinburgh, next Thursday.
Running at the same time will be Powwow in the Middle, organised by Rachel Kitching and Caroline Stuart.
Earlier the same day in Edinburgh is a chance to attend a special introduction to Financial Planning event run by the IFP at Standard Life's office at Lothian Road between 9am and 4pm.
The IFP said the first five people to send an email saying 'I want to go to the IFP's event next Thursday!' in the subject line can go to its event for free (click link for contact information). Those wanting to attend the IFP event don't have to be going to the Powwow to claim a free place.

The double billing of Powwows comes as the movement gathers pace, with Paraplanners recently being asked their thoughts on turning it into a cooperative.
The idea would mean all Powwow participants being entitled to an equal stake in the Powwows as a whole.
Richard Allum, IFP board member and founder of the Powwows, explained on the event's website: "By cooperative, I mean a formally established legal cooperative in which Powwowers can claim an equal share.
"We think it's the obvious route because the way we organise Powwows today works exactly like a cooperative could. And we think the national Powwow would be the Annual General Powwow.
"We have ideas about how the Powwows might help Paraplanners gather to exchange views, learn things, fix things and share things in the future – both online and off. And we have the support necessary to achieve it too.
"But we'd like as many Paraplanners as possible to share in shaping the next steps in the Powwow movement."
Both of next week's Powwows feature a round table discussion, chatting about the everyday practicalities of life in the profession. They kick off at 5pm.
Prudential, an IFP corporate member recently pledged its support to the event.