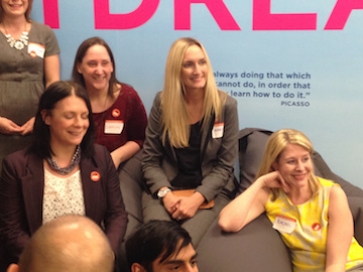 Paraplanners at Powwow in the Middle on Thursday

Paraplanners have expressed excitement at the developments announced to expand the Powwow movement and take it online.

There will be web-based Powwows – named Howwows - and a "digital tepee" - an online forum giving Paraplanners the chance to debate whenever they want.
These were announced last Thursday – just as a double mini Powwow was taking place. The Powwow in the Middle and Powwow north of the border took place simultaneously.
{desktop}{/desktop}{mobile}{/mobile}
Rachel Kitching, organiser of the Powwow in the Middle, said: "People were excited about the new developments, and are looking forward to getting online to keep the conversation going. "
Some 25 Paraplanners attended the Midlands event on Thursday, while 16 attended the Scottish event, organised by Colin Stewart.
He said: "On the expansion of the Powwow into digital, they were all very interested in that and it was all very positive. People were very interested in taking advantage of the webinars."
It was the first time a Powwow had been held in Scotland and he said: "I was delighted with how it went. We are hopeful of doing some more, it doesn't have to be in Edinburgh.
"We had some attending from Dundee, perhaps it could be in Glasgow next time, there's a lot of Paraplanners working there. It may be that we try to rotate it."
Regarding the Powwow in the Middle, Ms Kitching said: "I was delighted to welcome so many people to our fab new Google-style offices here at Sky View, overlooking the runway at East Midlands Airport.
"The Powwow was a resounding success, with non-stop conversation and plenty of new faces.
"There was a host of different opinions expressed on the various topics. That's what's so great about the Powwows.
"Rather than a consensus, it was about listening to a range of ideas about best practice, and understanding what works for some businesses doesn't work for others. Everyone took away tips to try out, and a fresh perspective.
"Now the digital developments will hopefully keep the conversation going in the meantime."
Key topics discussed on Thursday included fact finds and obtaining information.

Paraplanners were asked:
• What's the best fact find you've seen?
• Do you send it in advance of meetings?
• What are the most interesting questions you ask clients?
• How do you keep records up to date with client info?
• How does the info obtained from a fact find translate into a cash flow model?
• What makes a good review process? How involved is the Paraplanner in the process overall?

The future of the profession was discussed, including the issue of whether Paraplanners should all be CF30 as well as if there should be minimum standards and/or
qualifications. How much should Paraplanners be paid in relation to other roles in Financial Planning was also put to those who attended. Suitablity reports were a key topic discussed at the Scottish event.

More in this category: « Work & Pensions Committee: We need new pensions commission Budget 2015: Annuity re-sale proposal to be included? »
back to top